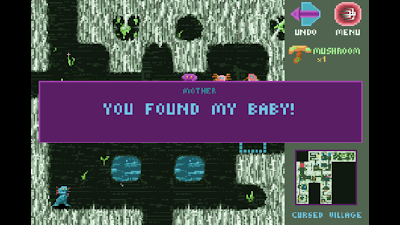 There's an interesting discussion occurring around the game Corrypt by Michael Brough. The conversation, started by game dev/composer/blogger Elizabeth Ryerson, centers on the game's aesthetics, which have largely been ignored by critics in favor of talking about mechanics. Ryerson goes on to give a descriptive analysis of how Corrypt's unassuming visuals embody the spirit of the game and are perfectly fitting. She presents comments from other indie game designers like Jon Blow, Zach Gage, and Greg Wohlwend as a sort of counterpoint, that if Brough had polished his graphics a bit more that Corrypt would have been a more marketable game, and could even have become a big hit. Blow and Gage have since defended their statements on Twitter and the comments section for Ryerson's article, saying that they did not mean to advise Brough to change what Corrypt looked like, but to more generally point out how close he is to having a commercial smash if he'd so choose.

I'm not a game designer, and I won't pretend to know best practices in that marketplace, but I am an artist who's been producing work for quite a few years now, and am personally familiar with the conflict between artist integrity and marketability. I've never sold a piece of art, as much as I'd have liked to. Sometimes I've produced artworks that are purposefully impossible to sell, like site-specific installations. Anyone want 10 6' gradient prints? I'm sure you've got a empty 35' stretch of wall that would be perfect for them. Art academia has taught me to be skeptical of the art market, if not to outright despise it. This is the perceived difference between choosing an "art" or a "design" path; "fine arts" or "visual communications." It becomes easy to pin designers as artists who have sold out, given up their dreams, and sacrificed their integrity to make some money.

This is a lie, of course, but it's a lie that I've told myself in the past as I look for answers as to why what I'm doing artistically cannot sustain me financially. Serialization is an issue as well. Even if I produce a work that is totally uncompromising, producing more works using that same idea in multiples or as a series can take on an aesthetic of factory production that could be perceived to undercut the market-agnostic concepts behind the work. However, curating a consistent aesthetic is key for building an audience that can recognize my art on sight as mine. It's the same reason I have trouble taking most graffiti artists seriously; it's not that they aren't producing visually interesting work, but rather often their output is meant to be anti-establishment, yet they're entirely defined by their own unabashed brand identities.

Art games always seemed to be coming from the other side of the spectrum, as the ugly ducklings in a market-driven community that never expected to make money, but it's cool when they do. Like the painters and sculptors before them though, they're be faced with the same ethical dilemmas about which moves compromise or do not compromise a work's artistic integrity. It's the reason big-budget games about revolution or "fighting the system" always ring a bit false. They've commodified revolt into a fun ride that ultimately encourages complacency, the opposite of insurgency. Knowing this, it's only logical that I'd seek to avoid making the same mistakes.

There's got to be a middleground though, and for each person, that may be a different place. For whatever reason, I'm more comfortable producing marketable writing, and while I still like to make art out of broken golf clubs and air mattresses, I like to take pictures too, which are far more market friendly. I don't write and take photographs because those products and services are easier to sell; I just enjoy doing them. I can imagine a similar thought process in games where accessibility is a pleasant happenstance, not a soul crushing mandate. But maybe that's a bit of a dream that only a very select few people can actually capitalize on. After all, I still haven't sold any photographs and am not getting paid to write this.
Posted by Dan Solberg at 10:00 PM