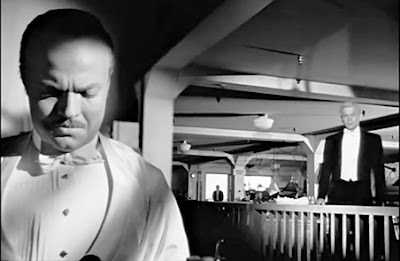 Matthew Burns offered up a welcome critique from the other side of the story, where Kane-like games have been produced for years and where the film might not be the best role model for games going forward anyway. The post is brief and to the point, so I won't rehash it all here except to say that I'm mostly in agreement with Burns, but I'm also hesitant to dismiss the technical prowess of Kane in pursuit of the film's purpose.

The first achievements that come to mind when I think of Citizen Kane are indeed technical: cinematography, lighting, editing, special effects, etc. Welles pushed the studio set in directions that were truly innovative at the time. I'm still amazed by the newspaper office set, particularly the ceiling. What looks like a solid surface is actually muslin, which allowed for hidden boom-mics and low-angle indoor shots. It's incredibly clever.

Categorizing technical achievements in film as separate from what a film is about is a fallacy though, the same as it would be in game design. What is the meaning of any film minus the expressiveness of key technical components? To remove the qualities of editing techniques is to remove adjectives from a sentence. Camera-centric technical aspects of film are as much a part of the language of film as acting, if not moreso to differentiate it as a medium from live theater.

If we want to compare the expressiveness of the procedural rhetoric of games to Citizen Kane or dismiss the comparison entirely, we best understand how the film conveys meaning in every frame. It's much more holistic than just acting, dialogue, and s twist ending.

That said, dear God, let's just put this analogy out of its misery.
Posted by Dan Solberg at 4:17 PM