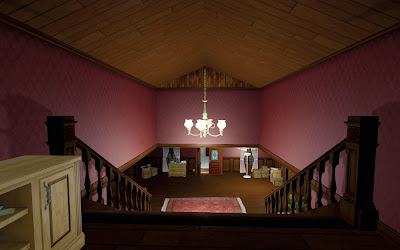 Regardless of critiques and interpretations of Gone Home, the game seems to be a title worth playing. Though I haven't played it yet, I certainly intend to in the near future. Before then though, a flurry of interesting writing has surfaced on the game, and I was particularly drawn to Matthew Burns take on the game as an example of literary realism. From what I've seen of the game (about the first 20 minutes or so), the literary realist label seems to fit the bill. As Burns notes, the narrative devices are not in service of systems as is the case with most game stories, but instead characters. There's a grounded consistency to Gone Home as well. Desk drawers must be opened to see what's inside among other rudimentary actions, and your role as a character who's returning home after an extended hiatus parallel's the player's curiosity to explore an unfamiliar place.

I'm glad games like this can exist now, but I do wonder how much potential there is to take on literary realism a second, third, or fourth time. Any process repeated over time will begin to reveal it's systemic qualities which could dull the strength of a game like Gone Home's unique narrative devices. However, even if games that use literary realism lose the newness that comes with doing something totally original, there's always a place and an audience for games of that sort. Consider black and white portrait photography which occupies its own niche in the photography world. While people who've seen photographic portraits before aren't likely to be wowed by the concept of pictures of people's faces, the content of the images is what continues to draw interest. What stories are held the subject's raised eyebrow, their piercing eyes, or their inviting smile? Perhaps Gone Home's exact format of house exploration would be stale a second time around, but the method of storytelling seems primed for new tales.
Posted by Dan Solberg at 10:00 PM