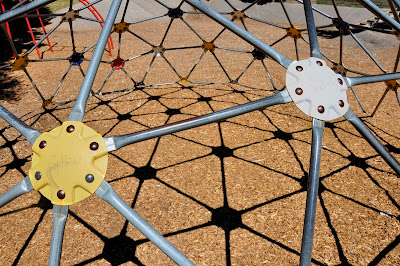 Source: Can a Playground Be Too Safe?
Author: John Tierney
Site: The New York Times

I witnessed my grade school playground transform over the years, incrementally older, simpler equipment (balance beam, rings) was replaced with more complex, safer designs made of plastic and rounded metal. Since I attended the same school from pre-kindergarten through 8th grade, I had a full 10 years to witness these changes, and while some replacements were due to decrepit equipment, particularly components made of wood, others seemed to have been made primarily with safety in mind. Injuries did occur, though mostly minor cuts and scrapes, but there was always well-known risks with the more dangerous kinds of play. Take the swing set for example. Not much harm comes from simple back and forth swinging, but using the seat as a kind of human sling to fly out at a peak angle was another matter, a risk everyone was keenly aware of.

By the sound of John Tierney's article in The New York Times, the saftifying of playgrounds has been taking place on a national level. Apparently you can't have merry-go-rounds or seesaws here in New York, which is too bad. Seems everyone is afraid of lawsuits from injuries these days, and the resulting safety upgrades have significantly cut down on the number of suits filed. However, psychologists site other negative effects of this kind of ultra-safe playground environment: without risk-taking, kids have more sheltered play experiences and are more likely to develop phobias of things like heights. Also, even though safer surfaces like rubber and wood chips reduce concussion rates, people tend to over-trust the safe nature of the surfaces and sustain minor injuries as a result.

I know this stuff isn't video games, but it is play, and it is games, and I just find the very nature of playground design fascinating. I don't think Katamari Damacy designer Keita Takahashi got to witness his playground designs come to fruition, but I'd have loved to see what he came up with.