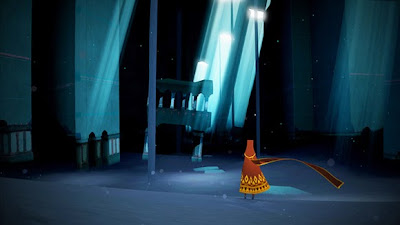 Looking for more video game talk in mainstream publications? Check out The New Yorker where Laura Parker has written a delightful profile on Jenova Chen and his studio thatgamecompany's fight to complete the critically-acclaimed Journey. It's a story of struggle and going all-in on a risky idea, a company driven to bankruptcy in pursuit of an artistic vision. I'd heard about some of thatgamecompany's troubles during Journey's development, but the triumphs of the game, and the inspirational talks of now-former developers always outshone the behind-the-scenes hardships. It all kind of makes sense now though that developers who became much more well-known names because of Journey, Kellee Santiago, Chris Bell, Robin Hunicke, all left thatgamecompany once their work was finished. A company with no money can't sustain livelihoods.

I'm also delighted to hear that Jenova Chen and company have rallied new financial support and are hard at work on their next title. As someone who saw Journey as the refinement of ideas represented in thatgamecompany's two prior games, flOw and Flower, I'm eager to see which direction they go next. The question of how to improve from Journey leaves me stumped.

It's a pity the commenters on Parker's article are so hung up on continuing to debate whether games are or can be art. The article itself isn't out to stake any sort of broad claim, merely to contextualize the aspirations of Jenova Chen and his team. That's the story of Journey's development, and it's a pretty interesting one at that. Don't let the mere mention of words like "art" and "Ebert" distract you from considering the human story at the heart of the article.
Posted by Dan Solberg at 10:00 PM