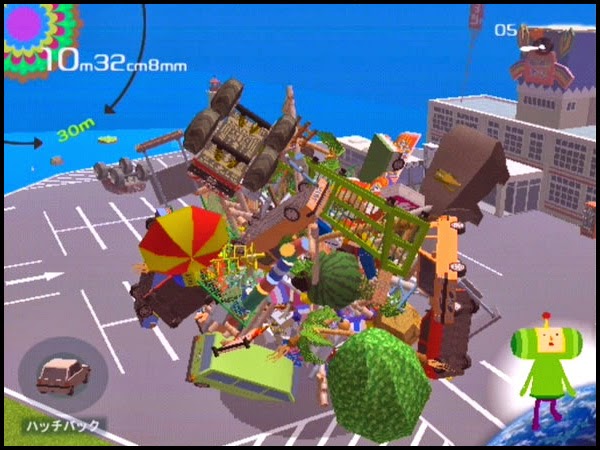 The subject of what constitutes "play" is a frequent one around these parts, and judging by his recent piece over on Kill Screen, David Shimomura and I probably have a lot we agree on here. Shimomura attended the latest Indiecade East conference and tracked down game design professor Miquel Sicart, who seems to think games are losing their sense of playfulness. He cites games like Katamari Damacy and LocoRoco as playful games that encourage a more freeform sense of play in their mechanics, even when they outline objectives for players to complete. Luckily, it seems like upcoming games such as Hohokum may be ushering in a new generation of playful games.

I have strong feelings for the Katamari games, particularly the first two. When I went to college the PS2 was in full swing, but I found myself dedicating less and less time to playing games, and while I still kept up a general interest in them, I was really only playing multiplayer games in social situations. Katamari brought me back into the fold though by offering something different than the same old formulas I'd played a dozen times over. To play is to venture into the unknown to some degree, and so a game that presents me with unforeseen circumstances has the potential for a more genuine sense of play, which Katamari delivers in spades. It helps with the playfulness that Katamari is so funny and whimsical, though those components are not necessarily essential for a game to be playful. You just have to not know what you're getting yourself into.
Posted by Dan Solberg at 10:00 PM