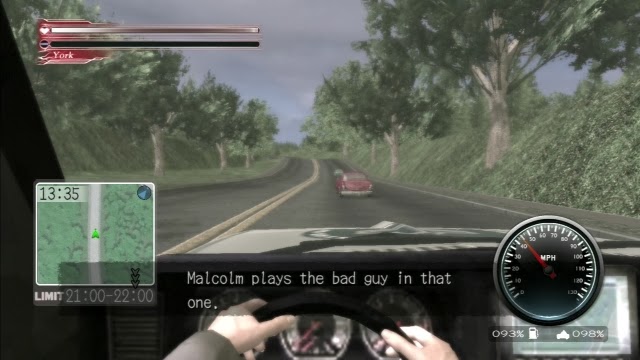 If you're not following Aevee Bee's ZEAL project, you're missing out on some great games criticism, like this essay on small talk in Deadly Premonition. While many games contain idle chatter, usually it just shows up in fleeting moments to cover load times or fill out a dialogue tree. In Deadly Premonition, you spend a lot of time driving from one location to another, and during that time you also listen to the game's protagonist conversing with his fellow passengers or with himself. There are no decisions for the player to make to alter the direction of the conversation, and the subjects discussed typically have little or nothing to do with the plot points in the game. Mostly it's talk about movies, which clues players in to the film-going preferences of the characters, which again, is not important information to help you beat the game, but it does flesh out the characters and the world they inhabit.

Aevee Bee mentions the elevator conversations in Mass Effect as being of a similar ilk, despite their load screen cover-up status. Having just completed the first Mass Effect game, I'm on board with this, and would have loved to see these personable interactions occur at other times in the game. There's so much dialogue in Mass Effect, but most of it is just Shepard pumping people for information. On the one hand, I get why this is the case, I mean, fail as it does, there's supposed to be a sense of urgency in the game that keeps Shepard's tone militaristic and focused. However, I think it contributed to making the romantic subplot extremely tone-deaf and devoid of real chemistry. Shepard seemed more likely to issue a passport to her love interest than start a free-wheeling fling. If nothing else, I'm curious to see how this aspect of the game changes in subsequent entries in the series.
Posted by Dan Solberg at 10:00 PM