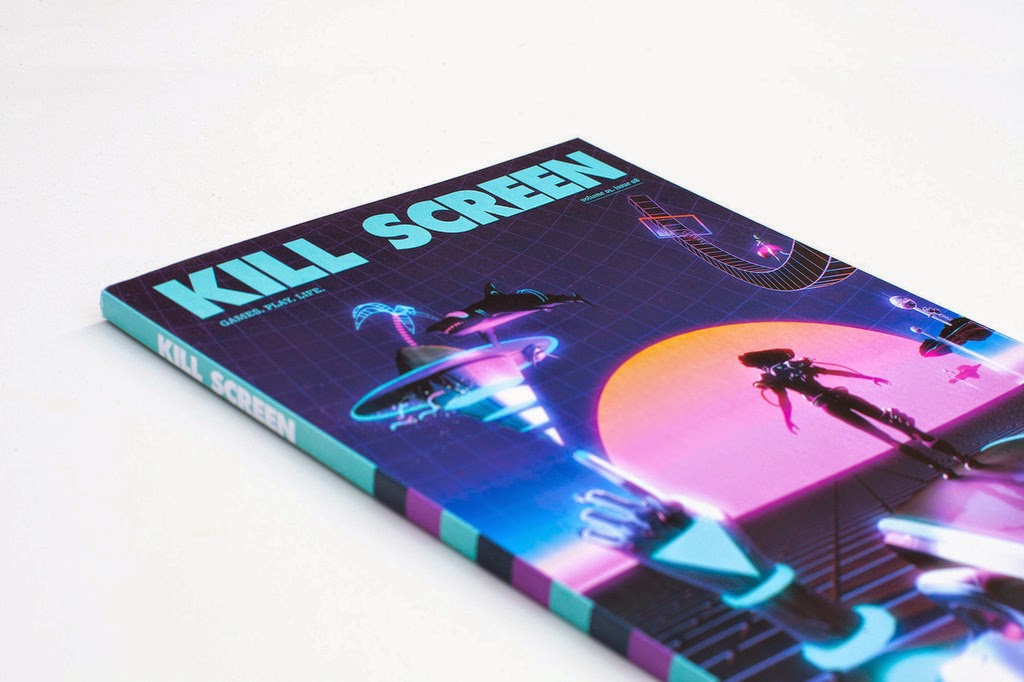 Kill Screen magazine Issue #8 is currently available for purchase over here. The theme this time around is virtual reality; probably the most narrowly focused subject the magazine has tackled, but it does offer the chance to examine the technology from past, present, and future perspectives. I've contributed a piece to this latest issue as well, about how the Oculus Rift VR headset could potentially be a democratizing force for creators, the same way Sony's Portapak camcorder was for video art.

For my article I interviewed artist Ian Cheng, who works in a variety of media, digital and physical. I was particularly drawn to Cheng's work because of his use of the Oculus Rift for his piece Entropy Wrangler Cloud in which viewers don the headgear and look around in a world full of floating debris, each with its own weight and momentum, among other characteristics. As a viewer you can only exert minor influence on the objects as they bounce off of and around you. I spoke to Ian over email about Entropy Wrangler Cloud and how the Oculus Rift could fit into the art world. You can check out the full transcript of our conversation below.

LOW CUTOFF: For starters, just looking to confirm that "Entropy Wrangler Cloud" was the title of the piece you showed at Frieze that used the Oculus Rift. Have you done any work with the Rift since then?

Ian Cheng: Yes, it is called Entropy Wrangler Cloud. The work grew out of a larger series of live simulations I have been making called Entropy Wrangler. It's a set of objects and beings each with assigned with basic properties and behaviors and left in a closed system to influence each other. Entropy Wrangler Cloud takes place within the Entropy Wrangler simulation, but instead of seeing the simulation from an overview perspective, you are within it, one object among the many. The head tracking native to the Oculus is used by a viewer to assert some influence within the ecosystem, but unlike a hero-centric video game, you are an extremely minor influence among many other influences that are out of your control and affect your VR perspective.


LCO: Are there other artists that you know of, specifically outside of the "game" sphere, using the Oculus Rift in their work?


LCO: I'm trying to get a feel for how widespread the influence of the Rift is in the art community, and whether or not it's the sort of device that could explode in popularity the way the handheld camcorder did for video art, or if it's too niche and destined for a quick burn. Any thoughts on this?

IC: The Rift, Avegant Glyph, and other VR devices will have to prove themselves on their own terms in their own markets to simply sustain themselves. As for the world of contemporary art, I believe more and more its task is to develop and act as interface to allow humans to relate and feel non-human experiences. The best art invents inside of us new patterns of feelings that exposes us, beyond rational consciousness, to ecosystems and abstractions that we have no other way of feeling. VR for me is an innovation to facilitate this. Whether Oculus Rift the company evolves to stay in the game or quickly burns in hype fire I have no idea. But as an innovation idea, the idea of sensorially entering a subjective perspective that is not your own, this is here for us to finally use and grow from.


LCO: Also, you hinted at this in the dis interview but it does feel like there's this window of opportunity for Oculus Rift creations prior to it's official launch that won't exist in the same form once it's commercially available. How do you reconcile the novelty of the gallery VR experience with the ideas you seek to convey in the piece itself?

IC: VR as an idea has been marinating inside us for a long time. People are conceptually ready for it. At Frieze London last year, I presented a Entropy Wrangler Cloud using the Rift. Beyond the Rift's novelty, the real trick was designing a comfortable neutral couch, very low to the ground, that helped remove the psychological barrier of stepping into the Rift. Like the way massage tables are designed, or how Freud covered his therapy couch in blankets to allow his patients to feel immersed in comfort and open. By making the Rift experience surrounded in comfortable normality, it was much easier for people to just focus on the experience of the work. The field of normality is really important with any new technology because it is what allows us to relate to its otherwise alien newness. This is usually the job of a marketing department, interface designers, and app makers, but since the Rift has not been officially launched yet and there is so few apps available for it, how this normality field is defined and who defines it is up for grabs. 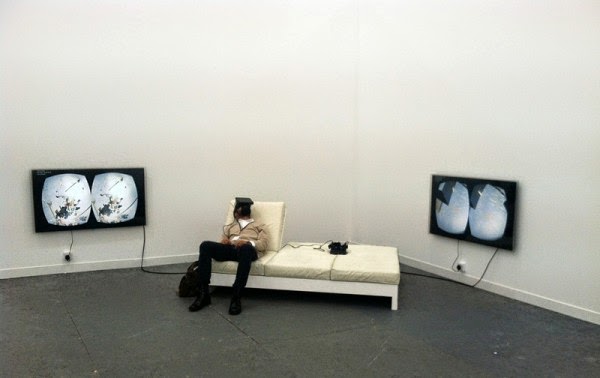 LCO: It's interesting that you spoke about the couch you used for Entropy Wrangler Cloud and the idea of establishing "comfortable normality" because the Rift is such an enveloping experience that overtakes much of your real-world sensory awareness. Would Entropy Wrangler Cloud lose something essential if it were made widely available for Oculus Rift owners to download and interact with in their homes instead of within your particular installation?

IC: No, not in terms of experience of the actual work. The installation at Frieze was specific to setting the scene and luring one into the experience of the work within the context of the peak attention crisis one is subject to at an art fair like Frieze. At home, comfort and privacy are not a problem. Although it is fun to think about what the ideal furniture for VR really is and how it smells. Your body primes itself before going blind to its context and it continues to sense even when you are consciously engaged in something else.


LCO: Because of its interactivity (even if that just means putting on the headgear), art that uses VR seems very viewer-centric. While it's a long way off from the experience of a video game protagonist, viewers are still given a certain degree of agency to activate virtual spaces. Would you consider those who experience Entropy Wrangler Cloud "viewers," "players," or something else entirely?

IC: With Entropy Wrangler, people experiencing the work are also influencing the work. They are not players like in video games-- where all the action is designed around the experience of the player -- but more agents or influences. The difference is when no one is using the Rift, Entropy Wrangler the simulation continues on. You are then just dead matter to be played with in the eyes of all the other influencing agents inside the simulation.


LCO: It seems like the Oculus Rift has granted a large number of people access to VR development that hadn't dabbled in the field prior. Do you feel that the Rift provided you with an opportunity to work with VR that wasn't otherwise easily available? Was the technology easy to work with?

IC: Yes, both the cultural and technical conditions of entry into VR were too quarantined for me before. Two years ago there wasn't the same ecosystem of support--Unity, a growing audience for VR experiences, the Oculus itself -- to justify the energy and time cost to work with VR. I'm not an engineer, and I've seen too many artists get absorbed into building a technology from scratch that they lose sight of what really matters. As an artist, I have to create a situation for myself where I cannibalize and setup the tools needed with some sweat and effort, and then play can happen with relative fluidity. Whoever invented the idea of APIs had the potential of creative play in mind.
Posted by Dan Solberg at 10:00 PM