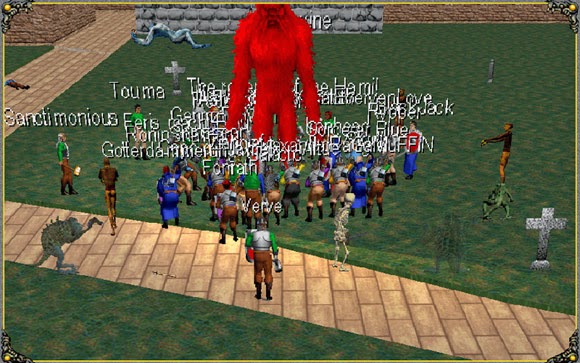 I can't claim to have much experience with MMOs, but I am consistently fascinated by the stories told by players of happenings within virtual worlds. For his latest New Yorker piece, Simon Parkin checks in with Meridian 59, a game considered to be the first ever MMO, and talks to some players who have been active in the game for 15 years. As usual with these types of communal environments, it's the people moreso than the battle systems or loot that keeps players coming back, but what I was most intrigued by in Parkin's report was that the style of gameplay in Meridian 59 is given significant credit for maintaining interest in the game.

Particularly, the brutal nature of Meridian 59's world where death means that you can have items taken from you, instead of just a semi-inconvenient respawn point. Attacks can happen anywhere, not just in specifically sanctioned battle arenas or modes. As a result, survival depends on players banding together and looking out for one another. If anything, this sounds quite a bit like recent Early Access sensations DayZ and Rust, where you're dropped into a lawless open world and your survival is contingent on the trustworthiness of the friends you make. It's easy to look back at a game like Meridian 59 and balk at the way traditional MMOs have gone post-WoW, but new games like Rust and DayZ are actually taking some of those old MMO ideas in interesting new directions. Plus, there's an attempt right now to bring Meridian 59 to Steam in the near future, so maybe a triumphant resurgence is in order.
Posted by Dan Solberg at 10:00 PM