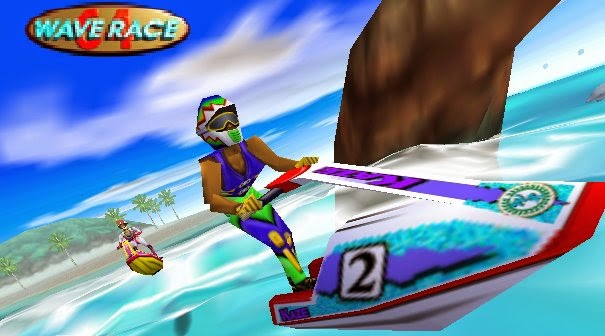 Source: What is a Racing Game? On Wave Race 64
Author: Zolani Stewart
Site: The Fengxi Box

Ever since I began reading this essay on Wave Race 64 by Zolani Stewart I've been humming the game's title screen music and fondly remembering this gem of a racing game. In fact it's Wave Race 64's status as a racing game that might prevent it from getting more recognition, but as Stewart notes, it's what the game does within the racing genre that makes it excel as much as it does. There is indeed an element of the sublime at work in the way the jet ski's steer around tight corners, the weight of the watercraft digging into the waves. Wave Race 64 is a beautiful game, and even going back to look at it now, I just think it's pretty. Sure the ocean in a game like Assassin's Creed 4 is going to look more realistic, but it's not a competition for realism, and the sum of Wave Race 64's aesthetic decisions is an upbeat, welcoming place.

Stewart gets into some interesting distinctions between "driving" and "racing" games, and I find the unique distinction with Wave Race 64 to be the open water courses. On these "tracks" the only designation about where to go is the preset rules of the game that ask you to slalom between anchored buoys. In some cases this allows for tremendous shortcuts or the sacrificing of an allowable penalty to cut "corners." I never owned Wave Race 64, but I rented it a lot, to the point where if I bought it, there wouldn't have been much left to do other than beating my own records. However, looking back, I do wish I'd have bought the game for its "driving" aspects. That is, sometimes I just have the urge to get back out on those waves, competitively or not.
Posted by Dan Solberg at 10:00 PM