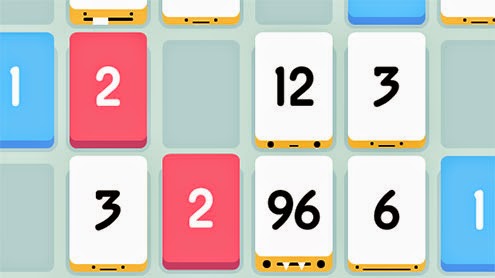 The Threes! cloning story has been pretty well documented at this point, but I found Patrick Klepek's report on the issue particularly enlightening. For a quick update on the issue, the super-popular free mobile game 2048 is a clone of another popular mobile game 1024, which itself is a clone of the popular-but-somewhat-less-so mobile game Threes!, which retails for $1.99. All of these games are tile-sliding puzzlers where each tile has a particular number and certain tiles can be combined to create a new tile that is the sum of the two numbers being combined. While some of these games use different number combinations and color pallets from Threes!, the game mechanics are pretty identical, right down to the size of the game board.

What's great about Klepek's piece is how he tracks through the cloning narrative and actually gets the points of view of the accused cloners, where possible. This is an enlightening approach to the subject where it's all to easy to talk about offending parties without them present (note: depending on the issue, sometimes offenders should not be brought to the table, but this is one where there's potential for good to come out of it and minimal chance of increased harm). It's not really a surprise that none of the clone developers see themselves as doing anything wrong as they each have their own explanations for why they made their version of Threes! the way they did, sometimes ignorant that Threes! even exists. Gabriele Cirulli made the web version of 2048 as a copy of 1024, unbeknownst to that games direct lineage to Threes! It's not really a surprise that the creator of the mobile, ad-enabled version of 2048, which is #1 on the App Store declined comment, since his game is the most unabashed clone of the bunch (a carbon copy of Cirulli's take, plus ads), but since Cirulli released 2048 as open source, there's no legal precedent to prevent this from happening.

Hearing these sides of the story serves to inform the public as to how a situation like this could arise in the first place. You can point to the creator of the ad-filled 2048 as the "bad guy" in this situation, but it's a string of events that made his clone possible. The App Store is a place where opportunists can thrive, and in doing so, they'll throw whatever informal inter-developer honor code may exist under the bus to do so. Where "open source" might mean a constructive, creative environment for experimentation for some, it's just free code to others. Whatever ends up happening on the "clone wars" front will be interesting, but I don't expect much in the way of action from Apple or Google. Instead, I think the fallout of this could potentially have a negative effect on open source game development, with studios deciding to be more protective of their source code than before or striving for more complex, less copyable designs. Or at least these were the views expressed by Threes! dev Greg Wolhwend in Klepek's follow-up interview.
Posted by Dan Solberg at 10:00 PM