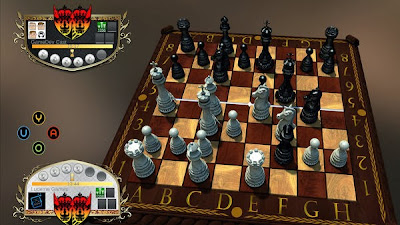 I am by no means a "chess player," but some of the changes in Zac Burns' and David Sirlin's Chess 2, a ruleset and upcoming video game, do seem pretty exciting. The reasoning behind their variant is meant to solve what they see as problems in play at the grandmaster level: most matches end in draws and play relies too heavily on memorization. Basically, the highest level players don't seem to be having much fun with the game anymore, and Chess 2 is trying to tactfully shake things up to specifically address those issues. There's a concept of "dueling," which I'm not entirely clear on when it occurs, but it involves a Risk-like battle system where each player reveals a certain number of stones in their hand in a rock-paper-scissors draw, and that highest number wins the duel. The catch is that you only have a certain amount of stones per game, and they're single use, so once you're out, you'll continue to lose duels until your opponent also runs out of stones. This modifier is intended to add an psychological action element to the game that gets you to engage with your actual human opponent, not just their board strategy. It's sort of poker-like in that way.

For me, the most interesting and accessible modifier is the "midline invasion," which is a win condition wherein a player moves their king across the midpoint of the board, ala scoring a touchdown. This rule sounds like it could be a really fun addition since the king's position becomes something you always have to keep in mind, even as you're trying to play the rest of the pieces normally. It reminds me of the snail win condition in Killer Queen too. It's no surprise then that the minds behind Chess 2 have experience balancing rosters in the competitive video game scene. I'm sure there are a billion other ways of modifying chess, but this one caught my eye and seems to make a lot of sense. It's no use getting upset about it either; Chess 2 won't be replacing regular old chess after all, but it could make for a fun alternative.
Posted by Dan Solberg at 10:00 PM