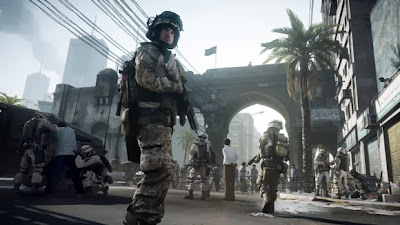 Simon Parkin's latest article for The New Yorker is a real eye-opener: an account of one Iraqi boy who's a top tier Battlefield player. It's the sort of story that seems like it would be at odds with itself, but perhaps speaks to how little I actually know about life in Iraq. As one would expect, there's not much of a gaming scene in Iraq; there aren't many places to acquire games, much less buy them legally. It sounds like more parents are warming up to games though because it keeps their kids indoors where it's safer. Yousif Mohammed, the teen from the article, speaks of how a game like Battlefield, which has settings in Iraq, is actually more popular because of it.

I'd have assumed Iraqis would despise the American jingoistic fantasies of Battlefield and Call of Duty, but it's interesting to see how someone like Yousif approaches the game: mostly as a well-made mechanical system, but also as a cathartic opportunity to kill virtual terrorists. After all, the point of focusing on Yousif is not that he's an Iraqi who plays video games, it's that he's an Iraqi who's in the top 2% of Battlefield players, and his story is shows great resilience amongst incredible darkness.

On a side note, why is it that every game-focused article Parkin writes for The New Yorker is met with suspicious or indignant comments about the very notion of writing about games? Someone on this post actually accuses Parkin of publishing near the PS4's launch as a promotional stunt, as if Sony was paying him for an article that never even uses the word "Playstation." I mean, at least it's a different kind of trolling than we're used to with games, but it's ridiculous all the same, and disappointing considering it's The New Yorker and what one assumes is an educated and open-minded readership.
Posted by Dan Solberg at 10:00 PM