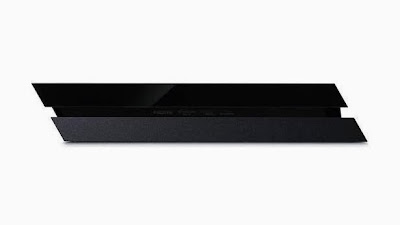 I wanted to sneak this plug in before the Xbox One launch. I was lucky enough to get to review the PS4 for Kill Screen, which I had no idea would be the case when I volunteered to go to a PlayStation event last week. At the review event, I sat through some hardware and UI demos before making my way to a dozen or so game rooms. I played The Witness, Octodad, Tiny Brains, Child of Light, Need for Speed Rivals, Infamous: Second Son, and Hohokum, among others. It was great to talk to developers and meet some folks in person that I'd only spoken to through other channels. It was a wonderful opportunity for me because I was there "reviewing" the PS4 from a more aesthetic angle, as if it was an art object. At the end of the event, I picked up a PS4 on behalf of Kill Screen and was able to spend a few more days with it before returning the unit to the office.

Soon, it became clear that I could actually write a real review of the machine, and that was the approach that made the most sense. However, I'd read some other hardware and OS reviews, and most of them are total slogs to read. Even despite Polygon's pretty layout, the text reads cold, as if written by committee. I wanted to write a hardware review that wasn't about covering every aspect of the machine, but got to the essence of what it does and how it fits into my own lifestyle. That I ended up dividing my PS4 review into 4 parts was total coincidence, but worked out pretty nicely. Anyway, I like the PS4; it's a better console than the PS3, but there's nothing I'm dying to play on it yet. Someday I'll probably want one for myself though.
Posted by Dan Solberg at 10:00 PM