Blips: Give 'em a Chance 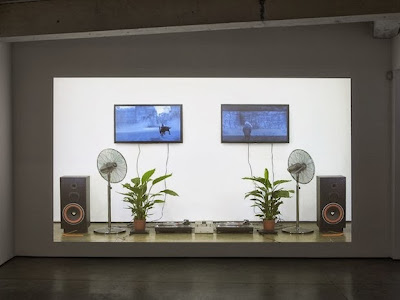 Source: How an artist turned Shadow of the Colossus into a rumination on chance
Author: Dan Solberg
Site: Kill Screen

I'm elated that my piece on artist Oliver Payne's exhibition at Herald St in London has finally been published. Payne's show opened way back in February of this year and features a video of an installation with Shadow of the Colossus being played on two monitors simultaneously. Using video games in artwork is not an easy thing to do without the result coming out as pandering or nerdily out of touch, but this piece was much better than that. I contacted Oliver in April and we slowly exchanged emails throughout the summer (luckily I didn't have a deadline!). Finally I had enough to go on to complete my article, which was submitted in August, but seeing as it was about an art show that closed 6 months ago, featuring an already-thoroughly analyzed PS2 game, it was justifiably not top priority.

But hey, now it's here, and you can read all about the artwork's John Cage influence and how video games take on chance aesthetics, for yourself. Thanks for reading!
Posted by Dan Solberg at 10:00 PM