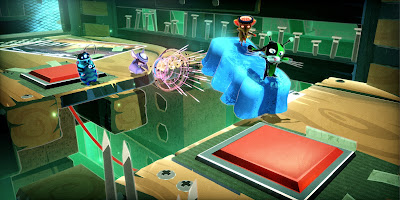 OK, let's kick off a new week with a bit of self-promotion, shall we? As part of the PS4 hoopla, I got a hold of the devs over at Spearhead Games who're working on the launch game Tiny Brains. I wrote a mini-profile (no pun intended) of the indie studio as a small team with a big opportunity. Tiny Brains was a Day 1 launch game when I first started talking to them, but got pushed back into the "launch window" soon after my interview. The game itself seems like a blast; I got to play it for a bit at the PS4 review event in NYC last week. It's a four-player local or online multiplayer game where you take on the roles of four lab animals with superpowers, running through bizarre testing chambers. It's an action puzzle game where everyone needs to work together to succeed. Check out the full piece to read more about what it's like to be an indie studio developing a next-gen console launch game.
Posted by Dan Solberg at 10:00 PM