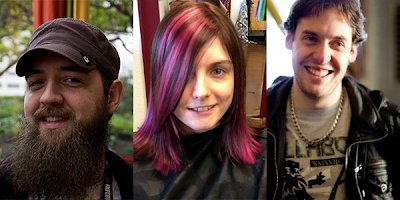 In my first semester of grad school, seeking my MFA in studio art, I made one piece. Just one, but it was a big one. I started with an image of a weather map, zoomed in to reveal individual pixels. I them translated that image into a 16'x9' quilt made of 6" squares, hand cut and machine sewn. I had to special order fabrics to get the colors to match the original image. Construction required dozens upon dozens of hours of mindless labor.

As part of a 2-year educational program, I was wasting precious time, time I could have spent learning from mistakes and trying new things. Meetings with advisers went nowhere with only the same idea presented week after week. There wasn't enough new, visible work to provoke meaningful conversation. The same went for peer critique. Plus there was the pressure of putting all of my effort into one project. What if it didn't turn out well?

I finished the piece only a couple weeks before the end of the semester, and was pleased with the result, but I purposefully switched gears my second semester and began working in video which improved my turnaround time and educational engagement immensely.

I can only imagine what some solo game designers must be thinking as they spend years, not to mention the depths of their bank accounts, working on a single game. In Alec Holowka's piece for Dork Shelf, he speaks with several designers about this very pressure, how it affects their behavior and how it changes the way they view themselves. The testimonials are at times both depressing and inspiring.

It left me thinking, is this the way indie game development has to be?
Posted by Dan Solberg at 11:31 AM