From There to Here: Super Metroid (WiiVC/SNES) Review 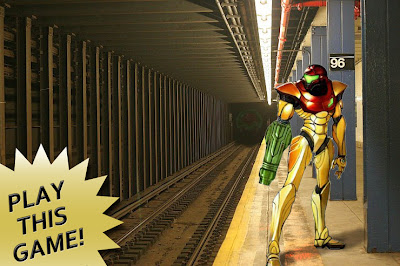 I've been living in New York City for almost 6 months and I still get lost all the time.  Even with pre-trip research, I regularly go the wrong way or pass my destination.  Typically, before venturing out of my apartment I'll Google Map my destination to look for nearby subway stations, and if there is one in close proximity I'll open a subway map pdf to plot my route.  If there are no nearby subway stations I'll Google Map driving directions and look for parking options.  Planning the expedition is a task in itself, but that plan can be easily derailed by any number of unforeseen variables once I finally hit the trail: road construction, poor signage, or faulty GPS, to name a few.  It seems like I'll just need to learn from experience and refine my transportation instincts to the point where I just know where I'm going.

The universality of this experience could be why a video game like 1994's Super Metroid has such lasting, broad appeal.  The Nintendo keystone has topped numerable "best game ever" lists, and inspired plenty of imitators, even this year.  And deservedly so, it is a great game.  Super Metroid has action and atmosphere, but the core of the game is traversal and cartography of the alien planet, Zebes.  The world of Super Metroid is full of bizarre underground passageways.  It's not unlike the NY subway system: dark corridors, deadly electrified pits, and an air of toxicity.  When you enter a new room in Super Metroid, the in-game map draws a pink square on the pause menu's graph paper background.  Additionally, I kept a full world map with detailed legend beside me on a laptop for further reference.  I constantly paused the game to get my bearings and see which spaces I hadn't visited or fully explored.  The map system is helpful for waypointing, but before I'd gained an understanding of the intricacies of Zebes' layout, I had to blind-jump in and hope for the best.

When I forged my own path, putting myself out there in the world, no amount of planning could have fully prepared me for what I might have encountered.  On roads and rails, unexpected late-night track maintenance, station closures, or unpredictable expressway traffic have cast doubt upon my carefully constructed plans, and occasionally motivated a change in course.  The maps I carefully scour before heading out the door are only the system in abstract with limited applicability.  Even Google Street View, which let's you see what buildings look like from the street, can be outdated and misleading.  Super Metroid parallels this disconnect.  When a Map Station is discovered, you can download a rough blueprint of the surrounding area, but it's incomplete. There are huge gaps between rooms that I had to chart myself, which pushed me to engage with my surroundings in real-time.  I didn't know exactly where I was going, but the only thing sacrificed was efficiency, which is, ironically, the element of most concern for commuters.

Meandering exploration is the name of the game in Super Metroid, but most often when navigating big city transit, time is of the essence.  Given the similarities between navigating real and virtual spaces, it's not happenstance that Super Metroid is one of the most popular games for speedruns: attempts to beat the game in as little time as possible.  My playthrough took about 9 hours with an 87% completion rating, but the fastest single-sgment run through the game is 32 minutes at 14%.  Someone even made a 100% run in 48 minutes.  I'm guessing these folks probably know how to get to work on time.  New York is a massive place to explore, and while there is no 100% completion rating, you can figure out how to get from point A to B with as little trouble as possible, at least in theory.  Super Metroid presents the player with an environment where seeing everything is attainable, where the systems are predictable and mechanics are flexible enough to be used more effectively by dedicated players.

When it comes to NY transit, I'm mostly at the mercy of the system, but there are ways to use knowledge of that system to better handle random variables.  When I commuted to work in DC, I knew the exact subway door to enter so that I would exit right in front of the escalator at my destination.  I was pretty proud of myself.  At several points on my way into Manhattan from Brooklyn I can switch to express subway lines that make fewer stops and arrive downtown in a fraction of the time.  I could pour over subway schedules and use the MTA's online trip planner, but show me a public transit system that runs on schedule to the minute, and I'll do something equally unbelievable.  As a result, I just go to the station when I'm ready, and peek out at interchange stations to listen for incoming express trains.  It requires quick thinking, and forces me to learn where all of the lines stop since multiple lines might come through one track at a transfer point.  If no express train is nearby, I can take a gamble and step out and wait for it or take my chances at the next station interchange.  I'm getting better, but like to imagine what I could do with a Grapple Beam.

Decoding Super Metroid's environment moment-to-moment is what makes the game satisfying to play.  The basic gameplay mechanics involve running up against puzzling obstacles with unique visual traits and searching for power-ups that will increase your repertoire of abilities to overcome them. The game's non-combat puzzles ask you to use the correct ability to get from one space on the map to another.  I reached a point where I worried that I had pushed ahead to far, too fast, cutting off my return route and unable to progress forward.  I thought if only I'd consulted the map more thoroughly, I could have avoided the predicament, and I was on the verge of starting the entire game over.  I cross referenced no less than 3 maps, with no apparent answer.  Luckily, after much critical thinking, bomb blasting, and wall jumping I figured out a solution that showed an avenue forward and, eventually, a way back.  I had to play to figure out the right path.  Crazy, I know – a video game that required me to play it.

Even though Super Metroid pulls from the same strange-person-in-a-strange-land feeling that mimics the experience of learning your way around a big city, it's tremendously fun.  That's more than you can say for your average bus ride.  This is where the science fiction fantasy of Metroid comes in to play.  Metroid games are known for their isolated atmosphere and slick sci-fi armaments.  A sure way to look lost or worse, uncool, while riding the NY subway is to pull out a map for reference.  Samus, on the other hand, equips a stylish X-Ray Scope and scans the environment for clues.  Also, she's always alone, so no one is there to give you a look that dismissively mutters "tourist," providing a safe space to be overly meticulous.  Even if someone else was there, remember, Samus' right arm is a laser cannon, so, 'nuff said.

When it comes to traversal Super Metroid behaves like a metropolis in microcosm, albeit a fantastical one.  It takes the challenging aspects of learning to navigate a major city transit system, but substitutes mundane actions like "board the subway car" and "sit in traffic" with entertaining space opera fare like "open the door with a Super Missile" and "freeze the flying jellyfish with an ice beam."  It's not that Super Metroid has helped me feel my way around New York City or that learning the subway has changed the way I approached the game, but I did relate to Samus more than the typical silent protagonist.  "Finding your way" is a concept that travels effectively between fiction and reality and across age groups.  It's a concept that, surprisingly, I empathize with more literally as an adult than I would have when I was only 11 back in 1994, – a testament to Super Metroid's enduring cultural significance.

:top photo modified from Christopher Allen:
Posted by Dan Solberg at 2:30 AM