What's This Do?: McPixel (Mac) Review 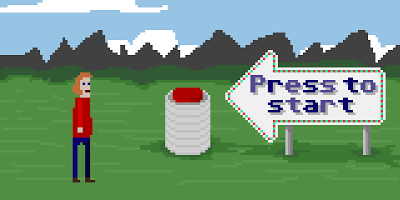 Before you can navigate the top menu in the blocky point n' click adventure game, McPixel, you're faced with a brief gameplay scenario.  Your character, the titular McPixel, stands in a field awaiting your orders.  In the center of the screen is a big red button with a giant arrow pointing to it that reads "Press to start."  There is no way to continue in the game without giving in to the temptation of the button, so you click it, like so many Wile E. Coyotes who have come before.  Instantly, a boulder falls from the sky, crushing McPixel and everything else on screen.  The main menu then pops up and you're free to select game modes and fiddle with the options as you'd normally expect.  In this short little introductory scene, McPixel let's you know exactly what kind of game it is: a cartoonish, old-school adventure game with a sophomoric sense of humor.

The premise of McPixel is a twisted joke itself.  As the player, you click around in screen-sized areas to interact with objects in hope of defusing a bomb, but often you'll click on the wrong object, triggering a quick animated gag before the whole scene explodes.  Seemingly derived from SNL's MacGruber skits about an inept bomb-defusing action star (itself a spoof of the late 80s TV action series, MacGyver), McPixel plays it's own influences up for laughs.  It's a bit like that part in Multiplicity where Michael Keaton clones himself so many times that the quality of his copies turn out a bit...unflattering.  It's true that McPixel's major "plot" conceit, like the Macs from which it's derived, is still bomb disarmament, but it's the clone that came out very wrong.  That may be a long walk to take for the concept of a game that primarily trades in fart jokes, but a funny juxtaposition in its own way.

Mechanically, McPixel is a conventional point n' click adventure game, but because of it's short-fuse timer and rapid level cycling, it feels quite different from other genre entries.   McPixel's levels are divided into subsets of six that you tackle in rotation.  You're only given 15 seconds per scenario to make a definitive action before the bomb explodes and the scene shifts to the next level in the group.  Adventure games are traditionally known for their slow pace, smart writing, and lengthy inventory-based puzzles.  McPixel dials up the speed, substitutes writing for Dumb and Dumber-esque visual punchlines, and makes combining the incorrect objects part of the fun.  It's true that you can find yourself stuck on a puzzle, rewatching incrementally less amusing gags play out multiple times, but you'll be onto the next set before too long.  This rapid-fire approach is an appealing recipe for someone like myself who needs an extra push to get my interest up for a point n' click adventure.

Juvenile humor combined with the act of "daring" McPixel to put himself in compromising situations is at the heart of McPixel's appeal. With 15 seconds to solve puzzles, you can spend your time clicking on things that you think will disable the ever-present bomb, or you can click random stuff that you want McPixel to mess around with before inevitably being blown to bits.  The character McPixel is quite a gullible dolt, succumbing to the mildest of peer pressure, all for your amusement.  McPixel's base-level instinct is usually to kick whatever you click on, which rarely ends well for him.  Policeman?  Kick 'em!  Stick of dynamite?  Kick it!  In one scene you're presented with a hair dryer, a yeti, and a barrel with a lit fuse.  You could click on the barrel in hopes that you put the fuse out somehow, but you'd probably rather see what happens when McPixel tries to blow dry a yeti. 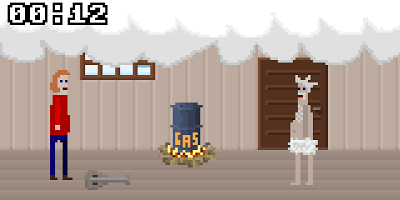 Ironically, sometimes going for the sight gags ends up disarming the bomb anyway, leading you to question your judgement about whether the obvious solution is too obvious to be the real answer.  McPixel plays with this nonsensical logic throughout its length, at times requiring you to pursue a ridiculous pair of actions (two clicks at most) to diffuse a bomb, but other times the solution is as simple as clicking on a bomb in clear view to swiftly win the level.  Note that if you can get a character to consume the explosive, it will probably detonate in their body, puffing out their stomach like a balloon, but ultimately saving the stage from annihilation.  With this precedent established, McPixel's play incentive stems from a desire to view all of the comedic possibilities, regardless of whether the bomb gets taken care of or not.  Plus, since the only way to earn 100% completion on a level and unlock bonus areas is to witness every joke in a scene, you'll spend a considerable chunk of your time with McPixel hunting them all down.

Make no mistake, McPixel's humor is as dumb as it gets, but it still made me chuckle from time to time.  The game goes lowbrow, but sticks mostly to slaphappy, cartoonish violence and bodily functions, instead of wading into dark or offensive territory.  Granted, someone might find the bonus level set inside a toilet offensive, but it's all quite tame in the grand scheme of internet-borne comedy.  It helps that the visual style of McPixel is, well, pixelated to such an extreme degree, reinforcing its harmlessly crude nature.  The character McPixel is nothing but a dead-eyed, pot-bellied stack of red and blue squares, and the rest of the resident populace is rendered in similar MS Paint fashion.  McPixel is full of nerd-culture references that look great/terrible in the game's chunky, low resolution world too.  The whole game comes off a bit like an overly-compressed JPEG version of MAD Magazine.

Like most middle-school humor, you'll probably reach a point where McPixel's jokes begin fall flat and the thinking behind them becomes too transparent to enjoy with your initial enthusiasm.  If you play McPixel for more than one suite of levels at a time, you risk stretching the appeal of the game's comedy beyond its limits, but in small doses, it's the interactive syndicated comic strip that your local paper would run if they had the technology and weren't opposed to jokes about public urination.  The same way a comic like Marmaduke is really just the same two punchlines repeated ad infinitum, McPixel also offers mere variation on a handful of gags.  At their core though, those jokes are still so stupid that they're pretty funny.  McPixel may not have perfected the accessible adventure comedy game, but it does step in a progressively-minded, if aesthetically dim-witted, direction.
Posted by Dan Solberg at 9:39 PM