This past weekend after my Samsung Instinct touchscreen phone died, I picked up a sharp new BlackBerry Curve and set out to see what apps I could download for free. A quick stop at the Top 10 list gave me the game Pixelated by Ebscer, which turns out to be a simple and addictive little puzzle experience. The game sort of plays like a combination of 7up's Spot for the NES and Tetris if you play with the random garbage blocks turned on to fill up a level. Beginning in the upper left corner, you have 21 turns to switch the entire mess of colored blocks on screen to one color. You select one color at a time to decide which color of adjoining blocks to convert next. Soon the rectilinear blob will be overtaking the rest of the squares in waves as you make strategic decisions as to which color selection will yield the greatest advancement while also tunneling the most effective avenue across the board.

Pixelated's appearance is as basic as it gets, this side of color TV. The squares are as directly geometric as they sound and there are no graphical flourishes or sound effects to correspond with the moves you make. That said, the game doesn't really require any of that, and it's otherwise justified by the game's nonexistent price tag (unless you want to Plus version, which has extra difficulty settings and other options). I basically made a competitive analog version of this game 2 years ago using construction paper and a tile floor, so I understand why Pixelated's banal aesthetic has it's own brand of appeal. Also, this being a mobile game, the easier it is to distinguish between objects, the better. 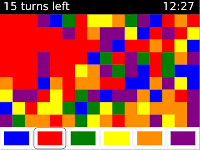 I'm just speaking from playing the free version, but one of the keys to Pixelated's addictiveness is the 21-move completion point. For the size of the board, 21 moves is the perfect number to maintain a relative level of difficulty and force most rounds down to the wire. I actually enjoy how the free version doesn't display a move counter, adding a degree of suspense when you whittle the screen down to a couple of remaining squares and you wonder for a quarter second whether or not you've got enough selections left to complete the round. Maybe I'm being overly dramatic about what is essentially an on-the-go twitch puzzle experience, but I still see a simplistic elegance at work.
Posted by Dan Solberg at 10:39 PM