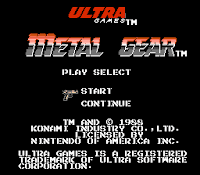 As I'm playing many of these acclaimed game franchise originators, I've noticed that some possess certain core elements that make the game a blast to play even on older hardware, and others seem overly ambitious or less-than-fully-realized until further iterations down the road. Metal Gear definitely qualifies for the latter category. For example, the first descriptor that springs to mind when I think of the Metal Gear series is "cinematic," owing a significant debt to the movements of the camera in a 3-dimensional space to convey a story across cutscenes in Metal Gear Solid and beyond. This debut game, ported from the truer MSX computer version, isn't able to pull off, in large part, what are understood as the concepts that Metal Gear does best. 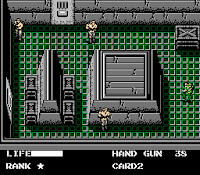 This isn't to say that Metal Gear is totally lacking in Hideo Kojima signatures (behold the cardboard box!), but they do come of as underdeveloped in many cases. The largest innovation Metal Gear brought to the table was the notion of stealth gameplay, which stood in substantial opposition to the run 'n gun and brawler games that the action genre was so saturated with. The idea of not destroying everything that moves was certainly novel, as was the narrative twist (along with the something's-not-right-here hints) towards the end of the game. Seeing those two aspects carried out at what feels like such an embryonic stage for the Metal Gear franchise was my favorite component of playing Metal Gear, because it felt like I was seeing the beginning of something great.

You still take control of Solid Snake here, infiltrating the oft future-referenced Outer Heaven stronghold, to rescue POWs and gather intelligence about what kinds of heinous activities are taking place there. You're dropped off on the island in the jungle with only your fists and a pack of cigarettes at your disposal. Early on you learn how to use cover to your advantage to sneak up behind guards and take them out quietly. Throughout the game you will build an arsenal of weapons and gadgets that will make handling unfriendlies much easier and allow access to areas of the map that would have been otherwise restricted. Freeing POWs and responding to transceiver frequencies will prompt you to the next destination and provide hints for items to look out for. 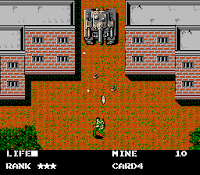 The problem is in how the game actually plays, despite the grandiose framework it's supposedly built on. The efficacy of the stealth method is often compromised by indecipherable hit detection. When you approach an enemy from above, it's a touchy guessing game to see how close you need to be to land a punch. Character movement is also a bit clunky as Snake frequently gets snagged attempting to hug around corners. These aspects suck some of the cool factor out of the Escape from New York-inspired protagonist. 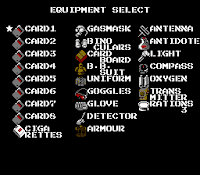 I can't go any further without addressing the cumbersome and tedious menu system, which interrupts the flow of the game throughout its entirety. You can assign one weapon and one item to your A and B buttons from the menu screens, but anytime you want to switch, you must reenter the menu and choose the new item. Other games have pulled this off without issue as even the original Legend of Zelda comes to mind. The main flaw here is that the game is full of doors that require 1 of 8 keycards to pass through them, and each of these cards are represented as separate items on the menu. This means approaching a door and pausing and unpausing the game up to 8 times until the correct card has been found. It's baffling in the face of such a simple solution as recognizing the highest rank keycard in your possession and allowing doors to open accordingly without having to individually equip them. I'd recommend keeping a map handy just to eliminate the trial and error process. Finally, with regard to the menu, it's worth mentioning the inconsistencies of its button navigation. The "back" button varies depending on which section you're looking at, making even simple menu navigation require memorizing an obtuse control scheme.

There remain a cavalcade of other minor annoyances in Metal Gear that serve to mar what could have been a truly great game. Each caveat adds it's own brand of monotony to the proceedings, leading you to trudge through one poorly designed element after another. I won't list all of the issues individually, but the point is that what this game lacks that the Metal Gear Solid series really utilized to its advantage, is polish. I understand that Kojima has dismissed this NES port as some kind of bastard child, but regardless of where the blame lies, even he understands where this forebearer fell short. And no, Metal Gear is not a bad game, but it's certainly not up to the usual standards of the pedigree behind it.

:screenshots from VGMuseum:
Posted by Dan Solberg at 1:49 AM