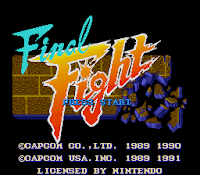 Unlike the other older games I've reviewed on the site so far, I played Final Fight back when it was current. Though I'm sure I previously touched the SNES port I'm evaluating here (via Wii Virtual Console), my primary experience with it was in the arcades. Unfortunately the console port loses some key components of Capcom's original product. That said, this is still classic beat 'em up action with iconic characters and late-80s style at its most ridiculous.

Structurally, Final Fight is incredibly simple. The plot is no more than a save-the-kidnapped-girl story while the game plays as a basic two-button brawler. However, the strongest appeal of Final Fight is its style, which melds perfectly with the rudimentary backdrop. You play as either Metro City Mayor, and former pro wrestler, Mike Haggar or streetwise roughneck, Cody. The level of cheesy machismo on display here is at superhero action figure status, where musclebound, often bare-chested thugs will take you on in the streets, in subway cars, and across other rumble-worthy locales. In between tussles you can bust up barrels to reveal large plates of barbecued meat, which act as health items. The wrestling motif also continues with set-piece fights staged in a boxing ring and in a steel cage match. One reoccurring enemy is Andore, a 16-bit replica of legendary grappler Andre the Giant. In fact a lot of the bad dudes in Final Fight could be interpreted as homages to WWF heel characters. You have to be able to extract value from this kind of dumb, sweaty-guy soap opera source material to appreciate the vibe Capcom was going for with Final Fight because they absolutely nail it. 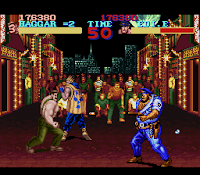 Pro wrestling and John Carpenter film references aside, the gameplay mechanics of Final Fight hold their ground. As with many games of this type and era, the solutions to the game's challenges often involve very game-y tactics. For example, enemies frequently fly off-screen after taking several punches, and instead of waiting for them to come back, it's most efficient to walk to the edge of the screen and rapidly jam on the attack button as the gang members continually waltz into your blind jabs. It might seems strange today, but this was just the way games played back then, often acknowledging space outside of the viewing area, but only allowing the player to partially access and exploit it. One could draw the connotations between this and the knowledge that pro wrestling is fake. Knowing this might cause some disillusion, but allows for a more honest appreciation (or disgust) of what is actually happening. 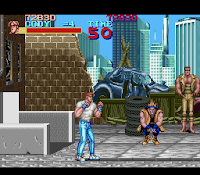 With those positive aspects of Final Fight laid out, it's worth addressing the porting issues that make this Wii Virtual Console version of the SNES game not the quality of product that a fan of the arcade game would hope for. A quick list of problems and omissions is as follows: no two-player cooperative play, only two of the three protagonists are present (no Guy), various censorship throughout, including that of salty language, transvestite/transgender enemies, and other non-kid-friendly (as determined by Nintendo) components, the lack of an entire level from the original, and a drop in audio/visual quality due to the limitations of the console hardware. These are serious shortcomings that may dissuade someone from purchasing this title. It should be noted that Final Fight: Double Impact is heading to PSN and XBLA in April, which looks to be the best version of this rather old game to date and rights all of the wrongs I mentioned while adding a hearty number of unique bonuses. If Wii is all you have then the SNES Final Fight may be the easiest choice, but it's a bittersweet package. My final technical note is that I played this game with a Gamecube controller, which has a painfully misguided and unalterable button configuration (Y=punch, B=jump) that makes special moves frustrating to execute and is just plain uncomfortable for rapid button presses. Why the punch command isn't the giant "A" button, I cannot fathom.

Despite these caveats, Final Fight is still a fun old-school beat 'em up game, and one of the best in its class. The SNES version doesn't offer the full original experience, but if you're just looking to feed a quick fix, it can do the job. Otherwise, seek the more robust port which will be widely available soon.

:screenshots from VGMuseum:
Posted by Dan Solberg at 5:46 AM