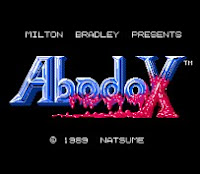 If the intro cinematic for Abadox doesn't get you excited to play it, I doubt anything I say will change your mind. The setup seems pretty simple. You play as a blaster-toting spaceman who must cut a path through the insides of a living planet-sized alien. The action alternates between side-scrolling and top-down perspectives in classic on-rails shooter fashion. Abadox isn't a perfectly balanced game, but it does have an impeccable visual flair that upholds and builds upon the more-than-competent shooter skeleton.

The analogy of visually overlaying a skeleton is particularly apt in Abadox too. In a genre where it's pretty easy to default to jets, tanks and other standard military combat fare, Abadox rises above a lot of the competition with its disgusting, fleshy art direction that still carries over despite the 8-bit representation. Giant tongues writhe and intestinal masses twitch as disembodied eyeballs and teeth attack from all sides. Altogether it amounts to one of the most creatively repulsive-looking games I've played. 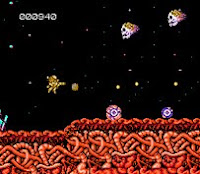 By all accounts, Abadox operates as a serviceable shooter, and true to the hardcore leanings of more contemporary takes on the genre, it's strikingly difficult in a few places. There is an emphasis on pattern memorization and flawless maneuvering to the degree that continuing after your first death (enemies kill you in one hit unless you have certain expendable power-ups) can be a frustrating struggle. After a fatal mistake, your character is reset to just after the most recent boss battle with only your initial bare-bones abilities, expounding the treacherousness of the part of the game that was already difficult to pass with an upgraded arsenal. If nothing else, this forces you to learn the intricacies of the enemy placements, which will inform successive playthroughs. 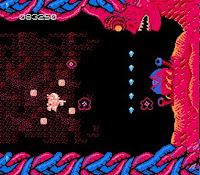 That said, I seemed to die by running into walls as much as anything else. So, when the game allows the spaceman character model to overlap solid surfaces a little on the top and bottom, the inconsistency of what counts as "contact" is magnified as a significant problem in a game that asks for such agile pathfinding. I'd have to assume that the flipside of this "bug" is that it's an attempt to compromise on the lessened negative space that exists as a result of using relatively large character models. These detailed sprites help set Abadox apart from other similar games like Life Force that may control with more fidelity but offer only minuscule shaceships or indistinguishable triangle forms as protagonists.

Abadox distinguishes itself visually as a unique slice of genre-fare with a solid Konami-like soundtrack. It can satisfy some impulse-play tendencies, but once some of the more arduous levels pop up, Abadox increasingly becomes a casual gamer's nightmare. Abadox is far from being a purveyor of "bullet hell," but it's also not to be taken lightly.

:screenshots from VGMuseum:
Posted by Dan Solberg at 2:46 AM