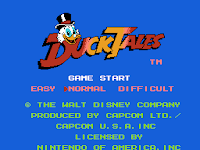 Thinking about the broader concept of DuckTails as a "thing" is a bit mind-boggling. Nonetheless, numerous strings of duck-related cartoons and merchandise poured out of Disney in the late 80s and early 90s. The culmination of this has to be the point where duck-branding seeped into the real world as a professional hockey team. Considering all of this, Capcom's DuckTales game for the NES seems pretty understated and an example of a game that rises above the cash-in tendencies of most licensed fare.

In the game you play as Scrooge McDuck, crotchety mansion dweller and greedy treasure seeker. In an action-platformer style, you cruise through 5 levels, collecting precious gems, uncovering hidden treasures, and defeating several bosses. From the outset you're given a choice of which of the 5 levels you would like to begin with. The non-linear approach is pretty striking, though there does seem to be a planned progression to the levels in their given order, since the designs do gain slight complexity later on in the Himalayas and on the Moon. All in all, the path doesn't matter too much as there's just a cakewalk of a boss in each that needs to be defeated to get the special prize for each world. 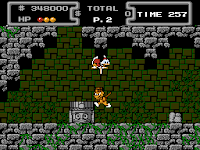 The traversal does take some getting used to though. You can jump, but can't kill enemies by simply jumping on them Mario-style. In what is actually a needlessly complicated motion, in mid-air you can press and hold B and down, and Scrooge will start hopping on his cane like a pogo stick. Now you can stomp enemies, reach higher platforms, and open chests, and you'll keep hopping as long as you hold B. It's a fun twist on gameplay that had become pretty conventional, even if getting into the hopping animation takes a little more effort than it should.

I had a hard time making it through DuckTails at first, and was disheartened when I read reviews claiming how it's so easy. I don't think I approached this game with proper respect though, as the change-up in control scheme will make this feel like a different kind of game, and it takes getting used to. That said, once you do get it down, and figure out where the bosses are, the difficulty ratchets down tremendously and I found myself blazing through the entire game in no time. There are higher difficulty settings to add more challenge, but it becomes clear eventually that this game was probably meant for the younger set. 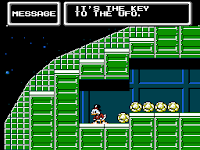 As a kid's game, DuckTales is really fantastic, but even without that qualifier it's pretty fun. There's a lot of exploration to undertake if you want to collect as much money as possible instead of simply conducting speed runs. The game seems like the type of thing that would have entertained me for hours back in the day, scouring print-outs of maps and hearing rumors at school about secret passages. In 2010 the brevity of the adventure keeps it from having Zelda-esque immersion, but consider how much more you're getting out of a licensed DuckTails product than what you were reasonably expecting.

:screenshots from Giant Bomb:
Posted by Dan Solberg at 9:44 PM