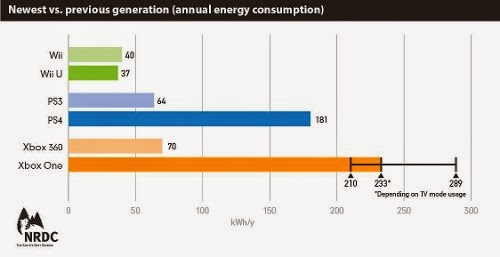 At first, I wasn't surprised when I read the above statistics about the PS4 and Xbox One's gluttonous power consumption, but the more I thought about it, I wonder how they can get away with being so against the grain of the energy efficiency movement. As Mandi Woodruff notes in her report, the power usage during gaming sessions is to be expected, and runs on par with a PC, but it's the standby mode and energy drain during non-intensive tasks that's a bit bewildering. The PS4 uses 45 times the electricity of an AppleTV to run Netflix and similar video streaming apps. If console makers really want to push for their machines to be "always-on" and multi-purpose, they should really figure out ways to allow them to run at appropriately proportional power levels. Until then, all we can do is as Woodruff suggests: change your system settings to make the machine turn off when not in use and switch to a dedicated streaming box like Roku or AppleTV for simple video watching. Sheesh, even the PS2 used to have a full-stop power switch on its back. Whatever happened to those?
Posted by Dan Solberg at 10:00 PM