Wii U as Portable Console: Lessons from Sega's Nomad 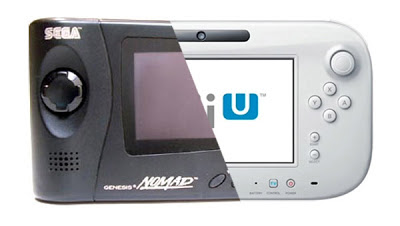 The Wii U has launched and Nintendo loyalists are busy testing out the console with their non-gaming loved ones.   One of the big selling points of the system is its ability to play full games on the Gamepad controller's built-in touchscreen, without the need to turn on the TV.  According to the marketing pitch, this feature frees up the TV for other members of the household and makes it possible to play Wii U games in otherwise TV-less rooms.  Word on the street is that the Gamepad can be taken about 20 feet away from the console and still hold a strong enough connection to function.  So, within a moderate range of the Wii U game box, the system has the ability to act as a portable home console video game system.

This is an exciting revelation, but not the first time something like this has been attempted.  Sega's Nomad was a fully functional portable Genesis, released toward the end of the 16-bit era in 1995.  The Nomad was short-lived, but it's easy to see some lessons that Nintendo could have taken from the system, and surprisingly, some missteps they failed to avoid.

Console and portable games have traditionally felt very distinct from one another, with portable games usually falling into one of two camps: those built uniquely for the on-the-go experience, focusing on short bursts of play, and games that act as little siblings or sidestories to their canonical console relatives.  The Nomad's promise of portability for standard console titles brought a different pedigree of games to this market.  I owned one, and often used it to play Sonic the Hedgehog 2 at my brother's basketball games.  While there had been some decent portable Sonic games on the Game Gear, those titles never held a candle to to the mainline series on the Genesis.

The Wii U Gamepad allows portable gaming of full console games around the house, designed with an active, social household in mind.  Had the Nomad been more successful, it could have set the precedent for this kind of family oriented gaming platform.  The Nomad could be plugged into a TV for big-screen viewing, and had an on-board controller port for a second player to join in.  Though if the Nomad was not attached to a TV a second player would have to look over the shoulder of whoever was holding the 3 inch screen (the original asynchronous multiplayer?), at least the there was the option.  The Wii U Gamepad only offers a solo experience, at least for the time being.

One feature where the Wii U definitely has an advantage over the Nomad is in ergonomic design.  Comparing the two is like putting an iPad next to one of those old, bulky cellphones from the 80s.  The Nomad was shaped like a brick with a battery block containing 6 AAs stuck on its back, making the system kind of weigh like a brick too.  The Wii U Gamepad is surprisingly light and features all manner of contours that make you feel like it was designed to be held by human hands.  The Wii U's touchscreen is large and prominent in its design, while the Nomad's LCD monitor is a bit dwarfed by the rest of the machine.

The reports of short Wii U battery life are a bit troubling, but anything was likely to be an improvement over the Nomad's power storage woes.  It seems the Wii U Gamepad can last anywhere from 3-5 hours depending on screen brightness, whereas you couldn't expect to last much more than 2 hours using the Nomad's rechargeable pack.  However, considering that the Nomad was a full-on game system in handheld form as opposed to the Wii U's mere video relay, the Gamepad's stunted battery life is pretty underwhelming.  That said, since the Wii U isn't expected to leave the house, Nintendo seems to be anticipating that AC power will be reasonably accessible if the situation calls for it.

The Nomad's failure was a product of circumstance as much as anything else.  It was released at the tail end of the Genesis' lifespan as consumers rallied excitement for the upcoming 32-bit machines.  The Genesis hardware was also widely recognized and often derided for its glut of unsupported add-ons like the Sega-CD and the 32X.  The Nomad debuted behind these other peripherals and likely suffered from the resulting market fatigue and loss of credibility in Sega's ability to release competent supplemental hardware for their 16-bit machine.  Additionally, if you had a 32X, you couldn't even hook it up to the Nomad because it blocked the AC output port.

The Wii U's Gamepad is poised for a greater chance of success.  It's a necessary part of the standard Wii U experience, bundled in with the console's launch.  The Gamepad is also multifunctional, making its ability to be a portable console not the sole make-or-break feature of the device.  Since the Gamepad is billed as an at-home device, it's not up against the iPad in terms of portability.  The Wii U Gamepad may not reach true portable console status since it can't leave the house, but it seems to recognize its limits and owns them.  With the 3DS and Vita struggling to gain substantial market presence in the face of iOS and Android games, Nintendo certainly doesn't need to make a go at a true Nomad successor.  Instead, Nintendo has wisely incorporated Nomad-like features into their Wii U Gamepad to make that controller incredibly versatile and adaptive to a plethora of home gaming situations.
Posted by Dan Solberg at 11:33 PM