No One Expects the Martian Inquisition!: Jamestown (Mac) Review 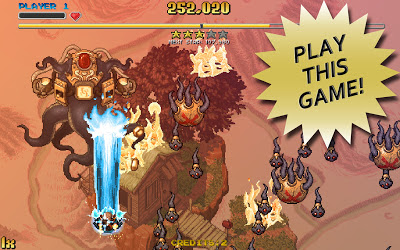 For most arcade-style games, directed storytelling is more about setting up a premise than fleshing out a plot in cinematic detail.  Take top-down shooters for example.  These games were born out of the arcade scene, full of other games loudly competing for players' attention with the promise of instant action at the drop of a quarter.  It's simply an understanding that you'll pilot some kind of aircraft and shoot everything that moves before they shoot you.  What's the plot of Galaga?  Of Raiden?  Of Ikaruga?  Space Invaders pretty much says it all in the title.  The aliens aren't Space Explorers, they're Invaders!  You have to defend your ground.

In contrast, indie shoot 'em up nostalgia trip, Jamestown, features a story that's a clash of such disparate elements that the product is undeniably memorable.  You see, the colonial American settlement Jamestown is actually on Mars.  Neighboring towns are under attack by Spanish/Martian conquistadors, donning pointy metal helmets and curly mustaches.  You play as Raleigh, a convicted criminal back in London (also on Mars?), who's looking to do anything to clear his name.  Turns out what's needed is to hop aboard some kind of flying buggy, alongside John Smith of course, and fight back against a particularly evil conquistador bent on using an ancient Martian weapon.

Like many video game stories, the basic setup boils down to "fight back," but Jamestown takes its history/sci-fi mashup backdrop and brings it to realization with a deep sincerity that gives you room to care about it.  Between levels, narrative unravels via text as exquisitely painted scenes pan across the screen.  Serene, contemplative strings set the stage.  The writing is from Raleigh's perspective and has an air of "letters from the front," written from the point of view of a downtrodden, educated man in a situation that only rewards keen instincts.

For players, having your wits about you is the utmost importance.  Jamestown is born out of the same space shooter tradition that regards "bullet hell" as a revered pastime.  There are 5 difficulty options and I highly recommend you begin with the easiest one.  This makes initial runs through levels breezy and empowering.  You'll have to rank up to at least the third difficulty level to unlock the last stage, but the game tiers you up to the challenge in preparation.  The story plays a strong role in incentivizing replay and practice.  I wanted to see what would happen after the final confrontation, or rather, I wanted to read what Raleigh had to say about it.  I'm not putting this on the same plane with, say, indulging in a FMV cutscene after a hard fought Final Fantasy battle, but it's in the same vein. 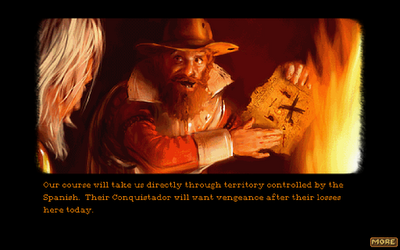 When the credits do roll, you're treated to Jamestown's real-world narrative in a message from the developers at Final Form Games: a team of only 3 people.  It says that the team had to spend two years and the majority of their savings to make Jamestown, followed by a heartfelt "Thanks for playing!"  If Jamestown's colonial America/Martian shoot 'em up outlay seems a bit farfetched as a player, imagine deciding to take that gamble as a developer and an investor.  The love of classic games is apparent, but Final From shows that games of this style have legs, particularly as value-priced downloadable titles, where their arcade-embedded predecessors always struggled: on the home front.

Jamestown has an in-game "shoppe" where you can trade in ducats (yes, ducats) earned from excelling in the campaign to unlock bonus challenges, weapons, and game modes.  All of this is par for the course nowadays, but I was particularly smitten with the unique "Farce Mode."  Even though Jamestown's story is one of its primary standout features, it's great to see the developers have a little fun with how ridiculous it all is.  With Farce Mode enabled, gameplay is unchanged, but Raleigh's story text is replaced with a guided preschool history dictation of the events in the game.  "Have you ever heard of Mars?  I bet you have," It begins.  The first segment ends in Nick Jr. fashion, exclaiming "Let's solve [the] mystery together!"  Farce Mode is a hilarious, knowing send-up of Jamestown's insane premise, but you're unlikely to unlock it before completing most of the regular story, keeping the core experience from being detrimentally self-referential, as so much game humor tends toward.

Sticking staunchly to the arcade formulas of old, right down to its impossibly dense 2D sprite art, Jamestown could have been a nostalgia-chasing also-ran, but instead it integrates storytelling that charms and invites.  There's not a ton of room to maneuver in the narrowly focused top-down shooter genre, a type of game that has struggled to gain a foothold outside of arcades, but Jamestown boasts the best of both worlds.
Posted by Dan Solberg at 1:47 AM