Opening this weekend at the Smithsonian American Art Museum (SAAM) is the Art of Video Games exhibition, curated by Chris Melissinos.  I'll be taking a deeper look at the show itself soon, but in the meantime, SAAM has been putting on a series of events they're calling Gamefest that lasts all weekend.  For Saturday this consisted of a couple lectures, live music and games, and a film screening (The King of Kong).  I'll focus on the two auditorium discussions of the day.
A Conversation with Hideo Kojima
I wasn't able to physically attend this talk since tickets were claimed in advance and the line that showed up for standby was pretty huge.  Luckily it's available to view online, which is the version I'll just briefly touch on.
I don't think "conversation" was really the correct term to describe the Kojima event, since it was really just the Japanese developer answering Melissinos' questions through a translator for an hour.  It's difficult to overcome language barriers in these kinds of situations, and as such, it's best to go into a talk like this with metered expectations.   Still, it's cool to see Hideo Kojima in person.  I love his games and his sense of style.
Topics ranged from original inspirations, to qualities of great game designers, to the difference between games and films.  There was nothing super surprising, especially for audience members who've been following Kojima and/or Metal Gear for a long time.  He wouldn't reveal anything about his next projects except to say that he's working on "something," and that the player will be more in control of the narrative pacing in contrast to the Metal Gear Solid series.
There was no mention of Transfarring. 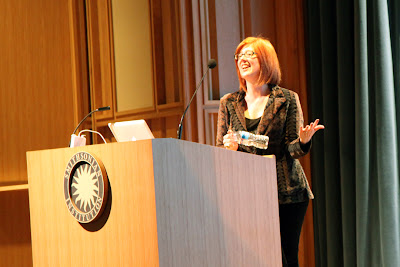 It’s All in the Design with Robin Hunicke

Indie studio thatgamecompany has been enjoying quite a bit of limelight at the Art of Video Games.  Producer Robin Hunicke is a producer who worked on their latest title, Journey.  Before that she was with EA for Sims 2, My Sims, and Boom Blox.  She spoke about what she sees as the core mechanics of game design, and how those points apply to people lives outside of games.

Hunicke broke her design goals down into 4 categories: Exploration, Expression, Experimentation, and Experience.  She related these to various points in her game development career, making sure to note how not only are these goals for what a game should play like, but also how the development process should operate.  She sees great leadership coming from someone who acts as a "force multiplier."  This would be an individual who knows how to ask the right questions of their team, and trusts them to answer those questions by doing great work.  The leader can't be an overlord.  She recognized Steven Spielberg, the create force behind Boom Blox, as an individual who is a master of this force multiplier technique.

Development on Journey was also discussed in the context of the 4 design goals.  Hunicke explained that the team had at one point built a variety of puzzles that required the two people playing the game to work together; think ladder lowering, dual switch pressing, and the like.  This was found to be incredibly stifling to the openness of the design concept and was ultimately scrapped.  It felt too much like you're completing a test instead of actually playing around in the world.  Those 4 design goals are really 4 different factors of play that, once combined, can make for an immersive experience.
Posted by Dan Solberg at 1:52 AM