Opening this weekend at the Smithsonian American Art Museum (SAAM) is the Art of Video Games exhibition, curated by Chris Melissinos.  I'll be taking a deeper look at the show itself soon, but in the meantime, SAAM has been putting on a series of events they're calling Gamefest that lasts all weekend.  For Friday this consisted of a couple panel discussions, a lecture, and a film screening (TRON).  I was able to attend all of the talky-talk events. 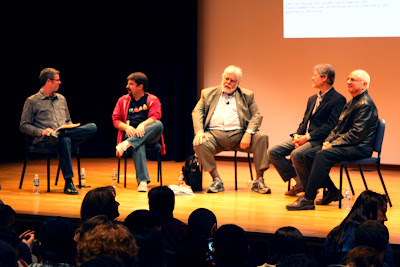 First up to bat was a series of industry vets who weren't above swapping a few war stories, but offer plenty of first-hand knowledge from the dawn of the medium.  Honestly though, the pre-crash era of games is the one I'm least familiar with, so I was happy to hear about the processing power equivalents of walking 13 miles to school in the snow.  I had no idea that games were being programmed prior to the notion of the live monitor interface.  They printed out on paper!  That might have been the most stirring factoid I heard all day.

Much discussion was framed around the forward evolutions in console generations, and how new sets of constraints are introduced in each cycle.  Daglow made the association that when a new piece of hardware was introduced, it was as if someone turned off the lights in your living room, rearranged all the furniture, and left you to feel around for familiar textures.  All of the panelists echoed the notion that design constraints imposed by limited hardware may have presented significant challenges, but ultimately they were a boon to focusing creativity and keeping their minds from running totally wild.

Mika parleyed these sentiments into discussing the challenges of true emulation and homage, specifically citing his work on faux NES title Dark Void Zero.  I couldn't help but think about certain rock bands who only play with vintage gear to achieve specific classic sounds.  Others mentioned how the lack of modern paddle controls makes it very difficult for new players to understand what made a game like Warlords so much fun.

The discussion was moderated by exhibition curator Chris Melissinos who retained a positively giddy tone throughout.  He was eager to share entertaining, personal stories from his own life in between panelist prompts.  The tone of the conversations were mostly feel-good, without the usual disdain for nostalgia that accompanies art criticism.  This wasn't really the venue for that anyway.  The Pioneers group shed light on some intriguing moments in history and successfully drew parallels between the industry issues of 40 years ago and those of today. 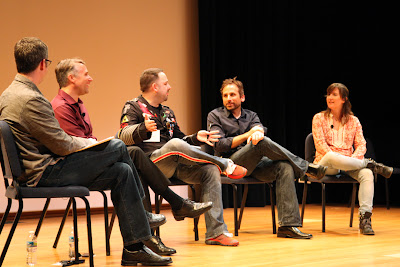 While the Pioneers panel focused on how we got to the present, the Future panel was filled with speculation about where we go next and attempts to define where in fact we currently are.  As a result there was actually some debate among the group.

Discussion sparked when Barnett suggested the idea of individualized "golden ages" for gamers.  The basic idea is that there's a range of years in your life when you are most absorbed in playing games, and most susceptible to that saturation having a significant role in your development as a person.  I don't know if that's true across the board, but definitively within certain genres and franchises.  Is there really a need to play any version of Mario Kart other than the one you originally fell in love with?  Maybe, but I doubt you'll like it as much.  Santiago argued that the increased diversity in the gaming community has led plenty of individuals to discover and understand games in more varied stages of life.

Diversity was actually a point of commonality among the panel; diversity among developer personnel, styles of games, funding models, audiences, and more.  One question from the audience spoke ill of "pretentious indie games" which Santiago later jokingly admitted to producing.  After a string of don't-like-it-don't-play-it responses, Levine smartly piped up and reassured the audience member that developers pull from a wide variety of games and other media for inspiration, and that it's likely that "hardcore game" (my quotation marks, not Levine's) developers will play something like Dear Esther and incorporate and translate some of those ideas into their future titles.  On the subject of borrowing ideas from other people's work, Barnett chimed in with a Monty Python quote for inspiration that went something like "All of my best ideas are bad ideas that someone misheard and made a good idea from."

Likewise with the notions of teamwork, sharing, and open communication being key elements of a successful development studio being touted, only DeLoura sidled with the remark that there's something significant and worthwhile to the singular vision of an artist, seen through from beginning to end.  As an artist, I was personally glad someone on the panel expressed that sentiment.  I'm all for teamwork, but for certain projects there are people who need to control everything in service of a perspective that only they can offer.  DeLoura offered Jonathan Blow's Braid as an example.

I thought we might be treated to more talk about the hot-off-the-presses Journey or the looming Bioshock Infinite, but a lot of the concepts being touched on were more "big picture" items.  This was for the best since it kept the discussions driven in directions that all of the panelists could contribute their expertise to.  I left the panel feeling like I'd actually seen some genuine intellectual discussion happen, which is what I was hoping for.  I've watched video of Levine speaking at GDC about the potential for narrative in games and read Santiago's writing about thatgamecompany's aspirations, so I went in with high hopes, which were mostly fulfilled. 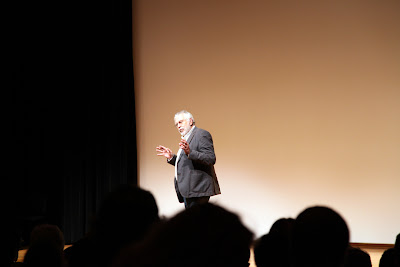 Having never seen Bushnell speak in person before, I only had the title of his lecture to draw from.  Would this be an encyclopedic history lesson?  An intimate trip down memory lane?  Turns out it was a little of both with generous helpings of kookiness and comic relief, and a general sense of wide-eyed amazement at what new generations of game makers are creating based on frameworks he helped invent.

Much like the Pioneers panel, there were some look-how-big-computers-were stuff, but I was most interested in Bushnell the businessman since he came off as particularly shrewd.  He pointed out that his company, Atari, had developed Pong, but that game had been ripped off by so many other companies that the majority of Pong machines weren't actually sold by Atari.  They counteracted this by faking the labels on the boards that they manufactured so that when competitors would look at them for copies, they'd end up putting things in the wrong places, and the boards wouldn't work at all.  They supposedly drove most all of their non-conglomerate copycats out of business with this strategy.

That's the other thing about Bushnell: he likes legendary stories, and he's certainly billed as one.  Are some of these stories myths?  We have to take his word for it I suppose, since at least the results of his endeavors are on record as facts.  I hadn't questioned anything until he mentioned the ET cartridge debacle and rumor of a desert burial repository for the unwanted titles.  I always had fun telling that story to non-gamer friends, but I don't know that I really believed it was anything but a tall tale.  On the other hand, Bushnell freely admits they had to sell Atari-Japan to Namco due to defying numerous rules and regulations out of ignorance of the country's bylaws, so why not just hop on for the ride if he's willing to go that far.

The talk wrapped up with a "ref" from Twin Galaxies and high-score king Billy Mitchell trotting out a giant video game trading card of Bushnell as an honorary award.  There was a chumminess between them and a heartfelt recognition that having an exhibition of video games in a national art museum is a truly significant step for the form.  They seemed to relish it so much that they burned right through Q/A time, which meant it dragged a bit, but in the context of this symbolic achievement, I understand wanting to hold onto that moment as long as possible.
Posted by Dan Solberg at 5:47 AM