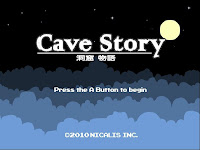 For a long time I've been wanting to build an art piece that centers around "cave themes" from videogames. The eerie ambiance has been handled in many different ways over time, each composer setting the correct mood for the cave level from an individual game. This had me extra excited for Cave Story, as I imagined a boatload of variations on cave tunes I'd looked into previously. Going in with that expectation, I ended up a little disappointed to find that the cave-yness is often downplayed in the soundtrack in favor of a wider-spanning action/adventure score. Ultimately this plays to the strengths of the game's action, which is fast and frantic, instead of the sleepy, subterranean atmosphere of cave dwelling in itself.

For most people who play games, the side-scrolling shooter/platformer, Cave Story, came at a time when it could provide a superbly constructed retro experience, serving as a welcome deviation from Call of Duty and Gears of War clones. I've actually spent time playing 8 and 16-bit era titles more than anything else lately, which makes for an interesting juxtaposition. Since Cave Story gets by a lot on its old-school charm, I felt like the nostalgic hook didn't quite grab me as I assume it did for others; the soundtrack being one example. This did allow me to judge the gameplay and story more on its own merits though, and directly compare it to its latter day in-genre competition. 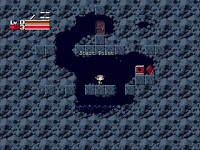 On that line of thought, Cave Story actually feels pretty unique. Sure it looks and sounds retro, but they way it actually handles is unlike any side-scrolling colleagues I can put my finger on. I haven't played Super Meat Boy, but the two seem to stem from a similar school of thought about what it means to make a new old game. Parts of Cave Story are extremely difficult (I played on Normal), but save points are frequent, and the post-death reloads are snappy, making subsequent attempts at tricky boss encounters challenging exercises in learning from mistakes, instead of frustrating retreads (though that does happen on occasion). 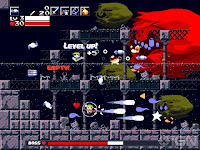 One of the more outstanding aspects of Cave Story is the weapon system. Once you acquire a gun you can upgrade it by picking up the flashing triangles that drop out of defeated enemies. Seems simple enough, but the trick is that taking damage when attacked not only sucks your life bar, but also reduces the level of your equipped weapon. This places a premium on agility and long range shooting accuracy, since trudging through enemies will leave you twice as weak as other similar games. This lead me to play pretty conservatively, constantly topping-off my weapon stats to maintain their max level. The payoff is that the blasters are extremely satisfying to use. Beams and rockets burst out in rapid multiples, dwarfing their humble pea-shooter source. These blasts demolish enemies by turning them into animated tufts of cel-shaded smoke. The result is that gunplay is cartoonish, but weighty and believable within that cartoon setting.

What's more nonsensical is the story, which is hard to get behind as the serious dramatic epic it seems to be attempting. You play semi-amnesiac Quote, a humanoid robot and post-war relic who finds himself on a strange floating island inhabited by a race of talking rabbits. Turns out an evil doctor has kidnapped most of the rabbits and is turning them into rabid killing machines with the intent of unleashing them on Earth proper, and it's up to you to stop him. I've never really seen Lost, but I like to imagine that plot plays out similarly. There's quite a bit of dialogue here, and it seems like the game's developer really wants to to feel for these characters, but ultimately when we're talking about preventing a glorified rodent infestation, the impact just isn't there. There was a time during my playthrough when a prominent character died, and I only found out by reading online that the sword he gave me was his dying gift. Who knew. Unfulfilled gravitas aside, I did enjoy the emphasis on mystery and detail-unraveling in how the story is told. Things play out like a talky version of Metroid, a narrative approach of which I'm a large supporter.

Cave Story is also a game that pushes you towards multiple playthroughs in order to see all the weapons, and ultimately the best ending, assuming you didn't do everything perfectly the first time. I can say undoubtedly, that if you don't use a faq, it's very unlikely that you will get the best ending on your first try (Spoiler: there's and even meaner, more powerful guy behind it all!). I'm not one for multiple playthroughs unless the game is short and arcade-y or is Chrono Cross, thus I found the specificity of the win conditions to get the most out of the game needlessly contrived. I'm sure to the player that figures out the correct sequence of events to trigger the best outcome, he/she must beget some degree of grand satisfaction, but for me it's not worth the unfun trial and error process, especially when I'd rather just play a new, different game.

As a love letter to classic videogames, elegantly crafted by a single individual, Cave Story stands as a tremendous achievement. Sure you can download this as freeware on your computer, but I think the WiiWare pricetag of $12 justifies itself with additional modes and enhanced graphics and sounds. Since the 8-bit pixel art doesn't really do it for me all on its own, I appreciate the higher fidelity of the upgrades. Though I'll probably never play those additional modes, I'm happy to see the effort put forth to add value to this as a purchasable product. Cave Story is a pretty unique retro adventure title that, lack of "cave music" aside, pleases much more often than disappoints.
Posted by Dan Solberg at 1:17 AM