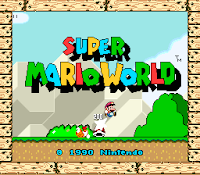 Having only ever played Super Mario World in brief spats on friends' SNESes, I went into my full playthrough with skepticism. Sure, I had confidence that this would be a satisfying game, but many enthusiasts herald this as the best Mario title to date. From what I had touched previously, this hardly seemed the case. Now, with numerous castles, ghost houses, and another Bowser battle under my belt, I can see where that stunning appeal comes from, even if it doesn't strike my fancy to quite the same degree.

I possess a long-standing fascination with floating platforms in games, and even though SMW doesn't really dig into that meta-game analysis, it does make you think about platform placement and level construction. Maybe it's just that the era when the platformer was the dominant game genre is behind us, but SMW is a perfect poster-child for what a well-honed 2-D platformer can achieve. This is something that modern games have a difficult time replicating without exuding nostalgia or at least coming off as largely referential to historical material. It's hard to think back to a time when Yoshi made his first appearance, and was brought on for broad gameplay variance, instead of existing as a callback or one-off power-up for use with an individual sequence. 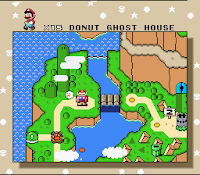 What I liked best about SMW was the way it mixed elements of action, adventure, and puzzle solving in a fashion I don't recall another Mario game doing. The action side is largely what you'd expect if you've played a Mario game since Super Mario Bros 3. There are power-ups that let you fly and throw fireballs, and, for the most part, jumping on enemies heads still does them in quite well. That said, if you've somehow only ever played the original Mario Bros, you might be surprised at just how complex the action system has become. On the adventure tip, you navigate levels via an overworld map, complete with branching and reforming paths. The map is good at letting you know when there's something secret in a level without giving away the answers. Every level doesn't need to be completed to beat the game, but since you can save progress, you have the luxury of taking your time to explore and replay levels without fear that the electricity might go out. A significant part of the adventuring is intertwined with the heinous puzzles that meter out the exploration phases in ways that require strategic item gathering. The most difficult puzzles are totally optional, but are pretty satisfying brain teasers that taunt you to give them a shot. Part of the reason I like the puzzles so much is because at their core, they can be solved by intelligent platforming. Thus SMW doesn't balloon it's gameplay by bolting on other genre mechanics, but instead, expounds upon the intricacies of its core conceit. The result is a game that justifiably places itself on top of the platformer pile, and serves as a substantial step forward for game design at the time. 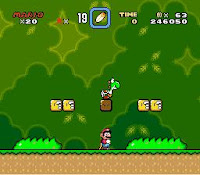 This dedication to form is what often makes Nintendo games great, but I could have done with some tweaking to particular elements of SMW. In comparison to SMB3's raccoon tail, the feather cape seems needlessly complex to control, especially in parachute mode. Coupled with the fact that none of the puzzles I completed seemed to require the gliding function (82% completion), it seems unnecessary. Then of course there's Yoshi, who I do not outright dislike, but find that I prefer not using him unless I have to. For me, using Yoshi changes the game a little too much, to the point where I'd rather just have a Yoshi game instead of putting him in a Mario one. I ended up more or less using Yoshi as a shield since you can sustain a hit while riding him and not take any damage other than losing your mount. You can wager a guess that I don't care for using the feather cape in conjunction with Yoshi either. Maybe it's the blatant disregard for physics, but, yeah, not a fan. As a small aside, the designs of most of the new enemies unique to SMW seem pretty uninspired, and it's no wonder that they haven't really shown up again since. 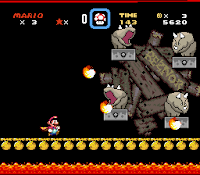 I appreciate Nintendo taking these risks though. They wanted to increase the complexity of their platform hopping game while also iterating on the blockbuster success of SMB3, all while positioning itself as the killer app for Nintendo's new 16-bit console. The list of games that have even been in that situation is pretty small, and shorter still for those that actually deliver on the bulk of their ambitions. SMW is such a game, but in some ways it actually feels remarkably humble. This feeling could have more to do SMW standing in contrast to the modern Mario's franchise-driven market saturation. Name a genre and there's a Mario version of it. SMW was Nintendo building upon an already solid foundation, but also venturing into innovative territory that so much iterative design is afraid to do. Sure, not everything works perfectly, but a lot of that is user preference. The brilliance of SMW's design is that there are multiple options for how to play a level, and one of those almost always feels spot on.
Posted by Dan Solberg at 1:49 AM