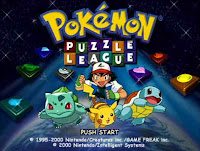 Unlike most of the games I review, I actually spent time playing Pokemon Puzzle League (PPL) back in 2000, when it was current. However, that was only a singular rental that, for whatever reason, didn't prompt me to purchase the full $60 game. On the Wii's Virtual Console, that price has been significantly reduced, effectively eliminating my barrier to entry on a title that I vaguely remembered being pretty fun. Turns out that faint inkling was pointing in the correct direction as PPL is a deceptively deep and satisfying puzzle experience.

The core gameplay of PPL is a tile swapping puzzle game, known to long-time importers as Panel de Pon. You are confined to a rectangular column wherein tiles ascend from the bottom and you must switch them left and right to match three same colors in a horizontal or vertical row, making them disappear. From that basic mechanic you can also chain combos together for a higher score or to dump junk blocks into your opponent's column in head-to-head competitive mode. If you played Tetris Attack on SNES this is probably sounding familiar. 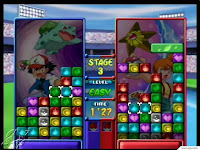 Of course the big draw here is that this is a Pokemon game, right? OK, maybe not, but the game is enhanced if you can derive some sort of amusement out of that material, ironic or otherwise. Every time you turn on the game a FMV clip (extremely rare for a N64 title) featuring characters form the original Pokemon cartoon series prompts the "story" that sets up the game. There isn't much of a plot to speak of, though each mode does take a slightly different angle on the Pokemon world. In the 1P Stadium mode, you defeat a ladder of CPU competitors that are recognizable from the animated TV show, and in Spa Service, Team Rocket, appearing in various cross-dressed regalia, tries to trick you into something-or-other in between line clear challenges. The toon-representative, voiced audio during matches can be grating, but since sound is largely inconsequential to this game, I usually had it muted and listened to something else. 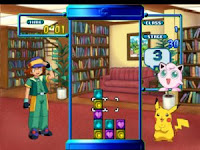 What I'm trying to get at is don't let the Pokemon name scare you away from this superb puzzle game. The PPL developers did everything short of retro-actively adding online multiplayer to expand and enhance the simple gameplay needed to justify this as a full retail product. Some of these work better than others but the range of options is encouraging since the game feels too easy at the outset. It became clear before long that I should have been utilizing those easy stages as training grounds for combo building because I hit a wall in the unlockable Very Hard difficulty where I could only win on pure luck. If you hit that wall or just want a change of scenery, you can check out Puzzle University instead and tackle block elimination puzzles at a more methodical pace. In this mode you are presented with a small amount of tiles and a limited number of swaps to clear them all from the board. In theory you could translate these combo triggering skills to the competitive modes, but the frantic nature of those battles just drove me into a mindless, button-mashing panic.

Other modes in PPL include Practice, Endless, Time Attack, and the aforementioned Line Clear. These can be nice distractions, but they aren't where the real action is, so I doubt much time will be spent there. Plus, with the lack of online leaderboards, these score-focused modes lose a lot of their incentive since I'm the only person with access to my copy of PPL that spends any time playing it. Additionally you can switch on 3D mode which turns your rectangular game board into a rotatable cylinder with tiles emerging from the bottom all the way around. The cylinder is clear so you can see through to the back if there's an area requiring immediate damage control. This, like the other modes, goes a long way in showing the effort that was put into extending the Panel de Pon play experience, but always feels like an aside to the "real" head-to-head mode. Sure, doing the puzzle thing with polygonal graphics in a 3D space works fine, but like Tetrisphere, it doesn't measure up to the addictive nature of the basic 2D structure.

It's a relatively common thing for Japanese developers to take classic puzzle franchises and reskin them for Western audiences (think Dr. Robotnik's Mean Bean Machine), but PPL seems to go that extra mile with its supplementary content. The resulting world is pretty silly, with its paper-thin premise and goofy cartoon tie-ins, but it does serve to bulk out the puzzle gameplay, and do so with a sincere charm.
Posted by Dan Solberg at 2:35 PM