Zelda games don't come around terribly often, and when they do it's with extremely high expectations. Looking at Twilight Princess now, it's easy to forget what this game's release was in response to, and why it was framed as the "mature" Zelda the way it was. Though the previous GameCube Zelda, Wind Waker, was highly regarded, series purists discounted its cell-shaded cartoonish style as childish. Thus Nintendo, in a move reminiscent, but thankfully not as extreme, of Ubisoft's Prince of Persia sequel (Warrior Within), gave Zelda nerds what they wanted in a grown-up, more darkly toned game. At least that was the billing. The reality is that TP pretty well matches the teen-Link portions of N64 favorite Ocarina of Time in terms of "maturity" and "grittiness," which is to say, it's a better looking version of what you've seen before.

Unfortunately, for as good a game as Twilight Princess is, a lot of the systems and story beats also feel like they're something you've played on an older system. The "dual worlds" theme was done back on the SNES, and the gameplay and items systems are heavily based on Ocarina's well trodden inventory. You'll be none too surprised to find out that at some point a mystical object is broken into several distinct pieces and scattered across the land, and the only way to recover them is to navigate a corresponding dungeon for each. Forget Ocarina, if you've played the original Legend of Zelda on the NES, you know how this is going to go. 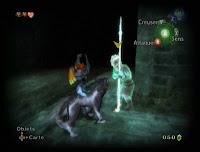 Not that TP doesn't throw interesting change-ups your way, it's just that they simply add to the formula rather than innovating it. The most distinctive new feature of TP is that you'll spend part of the game as a wolf version of Link. Playing in lupine form is fun for a little while, but since you can't use items or alternative weapons, I found myself racing through these portions as quickly as possible to return to my full arsenal. Once you reach the point in the game where you can shift between human and wolf on the fly, being a beast is a little more fun to mess around with, but I often wished I could just have used my wolf abilities without having to change shape since it becomes just another item, albeit a multifunctional one.

For most franchises, the preceding list of grievances would have you believe this game was nothing but a disappointment, but Zelda is a series with such time-tested gameplay structure and clever design, that drawing heavily from the well guarantees quality that at least approaches the genre's high-water marks. Functionally, most everything here flat-out works. If you've played a polygonal Zelda before, you'll feel right at home with TP's Z-, er, L-targeting, its lack of "jump" button, and its item usage. These aspects may not have changed, but everything does feel a little suped up. As examples, you can combine bombs and arrows to shoot exploding projectiles, use not one, but two hookshots (called "clawshots' here) to cling from wall to wall, and learn a series of helpful sword techniques that make dueling more dynamic than it's ever been in a Zelda game.

TP's aesthetic style turns out to be one of the game's highlights, and is for more subtle and nuanced than labels like "mature" or "dark" imply. One of my favorite visual components was the Twilight Realm, a light-bloom filled, desaturated world of eternal dusk. It might not seem like much, but the very idea that there aren't antithetical light and dark worlds, but instead two dimensions that correlate with a more complex relationship was quite refreshing. The Twilight Realm feels bizarre but not entirely foreign since it's just a different version of the regular one. The beings that reside within are a combination of Metroid Prime 2's Ing and computer glitches straight out of Tron. Creatures emit sounds of formerly organic beings that at some point mutated and had their vocal cords filtered through computer garble. There's a part of the game where you have to flee from a group of gigantic "birds" in the Twilight Realm that squawk hair-raising bellows akin to a modulated foghorn, to terrifying effect.

The list of stellar design choices carries beyond just the Twilight Realm. There's the gorgeous Snow Peak mansion dungeon which is like no "snow level" I've ever played before. I'd also like to note the "Hyrule Field Night Theme", which perfectly embodies the feeling of adventuring out into the woods in the dark, both calm and tense at the same time. Then there's the addition of the plucky, occasionally devilish sidekick Midna, who not only acts as your reference guide, but also brings plenty of color to the game's business-as-usual narrative. These pieces are just a small smattering of the ways in which TP successfully avoids a full-on retread of franchise trademarks, and in turn, offers something new to the Zelda-faithful.

I sincerely hope the next console Zelda game (Skyward Sword) significantly changes the way we play this series the way Ocarina did, because I don't think another incremental addition to the franchise is going to do it any favors. At TP's best it's as smart and polished a product as one would expect. But at it's worst, that expectation is met to a very predicable end. I hope this review doesn't sound overly harsh, since I genuinely enjoyed playing through this game for 50+ hours. I just think with Twilight Princess, Nintendo gave fans exactly what they asked for, instead of something they didn't know they even wanted. That sense of wonder is important to Zelda games, and when it shows up in TP here and there, that's when the game felt like something special.
Posted by Dan Solberg at 12:32 AM