The recent influx of motion controllers in the videogame market has also exponentially increased the number of people who spend time bowling, or at least pretending to bowl. I think I understand where virtual ball rolling gets some of its appeal: you can wear whatever shoes you want, you have less chance of hurting yourself, you don't have to deal with a bunch of annoying kids on the next lane over, and you can stay home/play your own music/etc. While that can be convenient, physical bowling alleys are areas that maintain a behind-the-times ambiance and exude a unique brand of charm. So when games strip away all of the cigarette machines and dusty arcade cabinets, all that's left is simulated pin+ball physics coated with a splash of style in line with the other mini-game collections on you console of choice.

It's with this contemporary backdrop that I'm playing Championship Bowling, a product from a company called Romstar (a great name for a UK grime MC) originally released in 1989. Like bowling, the core game is 10 frames of rolling heavy spheres down a slippery wooden plank. Championship Bowling relies on old fashioned timed button presses to gauge how powerful and with how much curve each ball will be thrown. This is indicated by some self-explanatory HUD devices. That's pretty much the entirety of how the game plays.

There are a few variables to choose from before you begin a game that might accommodate different play styles. There are 4 characters to choose from, all of which look appropriately bowler-chic. There's not much difference in the way each handles except whether they are right or left handed, which affects your ability to hook the ball in particular directions. Since pins are setup symmetrically, it's not really a factor though. Also a matter of preference is the ball weight, which has 5 metered options. The pros and cons of the each size are what you might expect, balancing the scales between power and spin control. Oh and the lanes have 5 color swaps, one of which I found really difficult to see the power meter on my TV.

The surprising thing is that Championship Bowling can be kind of fun. Perhaps this is because the core of the bowling simulator experience hasn't really changed much over the years. It's still satisfying to get strikes and challenging to throw them consistently, yielding ever-prized depictions of turkeys. Likewise, Championship Bowling is a better group activity than a solo one. Bowling is often an activity associated with parties, another aspect that translates well from the real world to the game world. You don't have to pay attention to Championship Bowling or any other bowling game until it's your turn, keeping associated party experiences well-rounded instead of feeling gamer-exclusive. 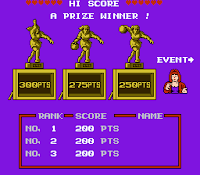 Championship Bowling can be a bit frustrating for 2 reasons: party-killing music, and the rarity of strikes. Short in its loop, incessant in its repetition, and skull-gnawing in its melody, your television's mute button was invented to deal with tunes like the one Championship Bowling spews out. Doing so will also cancel out sound effects, but the noises employed here won't be missed. Something that will be missed however is at least one pin on the first bowl of each frame. Something is wrong with your bowling game when I can nail splits that I'd never be able to replicate in real life, but will finish 10 frames without a single strike (and around 9 spares). The exactness with which you must align, power-up, and hook shots to knock all 10 pins down is far too unforgiving. I'll wholeheartedly concede to modern bowling games on these two fronts.

I hope we'll get a break from bowling games for a while, seeing as they're now on every system on the market, and an individual console definitely doesn't need more than one of them. At this point, if you're seeking a bowling videogame, just pick up one for whatever controller you like best. As for Championship Bowling, there's not really much reason to go back to it, though, music aside, there's not anything horribly wrong with it either.

:screenshots from VGMuseum and Giant Bomb:
Posted by Dan Solberg at 11:18 AM