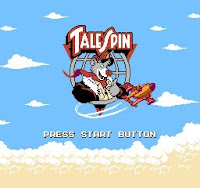 Having just reviewed Capcom's DuckTails game, their take on TaleSpin seemed like a fitting companion piece. The two have a lot in common, visually and structurally, despite fitting into totally separate genres. While they both seem to be marketed towards kids, the difficulty of TaleSpin doesn't dwindle as soon as you figure out how the core systems work. In fact, TaleSpin relies on pattern memorization and quick reflexes to a degree that will challenge most first time players.

TaleSpin is a side-scrolling shooter that requires you to dodge enemy fire, pick-up money and cargo, and defeat a boss character at the end of each of the 8 worlds. The game starts you in a frustratingly underpowered position, allowing you only one shot at a time, and clunky maneuvering capabilities. It's worth stomaching the first level and collecting enough money in the process, because you can use the cash to upgrade between stages. I found that getting the rapid fire gun as soon as possible made the gameplay much more pleasant to work with. 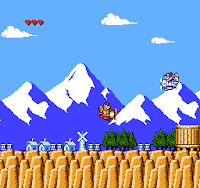 Even with an engine upgrade, the movement controls can feel sluggish from time to time. As a nice touch you can press A and flip your plane around backwards, making the screen scroll left instead of right. Unfortunately you can't flip while moving up or down, stunting the fluidity of an entertaining genre alteration. In general, every game mechanic is a bit of a chore to use until outfitted with the proper upgrade, at which point that device becomes enjoyable. I understand this concept as an incentive builder, but it's killing replay value for me because I know I'll have to drudge through those early stages if I want the game to become fun again.

I appreciate the challenge that TaleSpin throws at you, particularly with some of the boss encounters and the well-hidden bonus worlds. The final boss was the most satisfying and arduous to take down, which is just how I like my action games to end. It's a plane vs. plane dogfight followed by a battle against an immense airship. In order to supe up your flying machine to a level that can compete with these tyrants, it's helpful to gain access to secret bonus worlds. These minigame stages let you rack up points and extra lives with ease by simply piloting around an enemy-less area, popping balloons. Hunting down these locales encourages you to swap between left and right scrolling often to fully explore each area's nooks and crannies.

TaleSpin's flaws end up denting the overall experience, but certainly not rendering it undrivable. Even more so than DuckTales, TaleSpin demands your respect, as it's not to be taken lightly despite it's cartoon tie-in.

:screenshots from Giant Bomb:
Posted by Dan Solberg at 5:12 PM