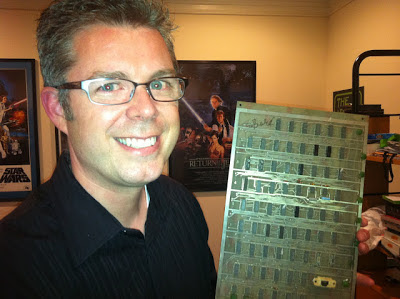 The term "enthusiast" gets thrown around a bit when talking about people who write, discuss, and make videos about video games. Chris Melissinos does not work in the gaming press, but he may be the truest form of video game enthusiast that I've encountered. The man, a guest curator for the Smithsonian Institution's The Art of Video Games exhibition, loves games, and the excitement and optimism he has for the medium is palpable. A couple weeks back, Melissinos gave a lecture at NYU Game Center on the rise of video games as a cultural power and a postmortem on the Smithsonian show. Full video of the talk and Q/A is embedded below.

Chris covered a lot of territory, but one aspect he returned to a few times was games as a part of youth culture. He recounted his own first experiences with games and the magic of programming, even from an early age. He referred to the generation of kids that brought video game consoles into the home environment in the 70s and early 80s as "bit babies." According to Melissinos, bit babes were largely misunderstood by older generations that didn't play video games and were mystified by this emerging medium that had seemingly hypnotized young people. The situation has changed now that bit babies have grown up and many have children of their own. Melissinos admitted he and his family play games almost every day, and is elated to see his kids discover facets of games that resonate strongly with them.

In Melissinos' section about The Art of Video Games, he again touched upon the powerful impression that games leave on youth. He observed the ways that families navigated in the exhibition. Children often lead the way at the beginning, powered by the excitement of seeing games that they recognize and may even own on display in a museum. Remember, these are kids that are more or less growing up without physical arcades to frequent, so having a real space for video games is a kind of novelty in itself. Eventually families would reach the room with the historic timeline of game consoles, and here the parents are reminded of the games they used to play. They point out titles on decades-old systems and explain them to their kids. The parents may not have played Pitfall! or Missile Command in over 20 years, but the photographic recollection of how mechanics work and tales about their social interactions with games often came to the surface.

Many of the video games that I remember from my youth (a child of the NES) may not have been aspiring to be viewed as artworks, they were just fun to play. Melissinos noted that while social betterment and self-reflection are worthwhile pursuits for games, we shouldn't discount those games that simply set out to provide joy for the player. He goes on that when a game is able to make you smile, or pleased with what you have accomplished, that sometimes that's enough. Makes me wonder what I'd think of games like Bubble Bobble or Marble Madness if they debuted in 2013.

Chris Melissinos' The Art of Video Games exhibition is currently on view at Seattle's EMP Museum. To read my thoughts on the show, check out my review from last March.

:top image by Dave Edstrom:
Posted by Dan Solberg at 2:32 AM