I have no intention of playing Aliens: Colonial Marines (ACM), and I never did. I soldiered through video of an extensive portion of the game being played, and it came off as a rote shooting gallery with particularly nauseating weapon reports. Unless there had been a groundswell of compelling critical praise, I was never going to touch the game. Besides, Alien(s) fandom, as with most fandoms, is somewhat confounding to me, what with the religious regard the most ardent members of the cult hold their canon. I can't relate. 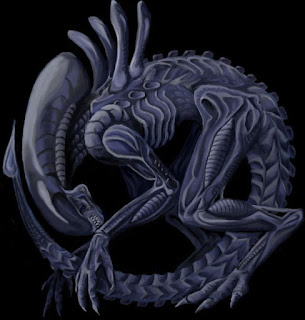 It seems the game isn't being received too kindly by most critics either, citing ugly textures, broken AI, and a strong whiff of the nonessential in terms of the larger Aliens fiction. Still, a small handful of critics seemed to enjoy ACM. I was especially drawn to Brandon Justice's 9/10 review for EGM, not because of what he wrote (mostly boilerplate upvoting, all told), but for the vicious way that commentors reacted in the infinite space below. To paint the general sentiments with a few words, I'd apply "distrust," "suspicion," "anger," and "malice." Remember, these are responses to a positive review.

I'm not out to refute individual comments; that's an unproductive road to travel. What struck me most was the overriding sense of what readers said they expected from a video game review: a reasonably objective evaluation of a product. The key word here is "product," as in "an item on sale in a marketplace," the game in relation to capital. With the presence of a more significant push than ever before for games to be critiqued as creative works of art, I wonder, is that pursuit at odds with what a very significant portion, if not a majority, of what video game enthusiasts show they want?

Since so many commentors on the EGM review claimed that Justice's praise had been purchased by ACM's publisher (accusations which are unfounded), clearly money is already on the brain. The snap judgement nature of these reactions could stem from one's personal understanding and cataloging of video game review scores. A great number of people use those figures to gauge whether or not they want to purchase a game, and have their own score threshold for when a title becomes worthy of their cash. This is especially variable for games that earn scores between 6 and 8 out of 10.  Looking at how low ACM was scored (twice as many scores below 6/10 as above it on Metacritic, and only one other critic scoring the game at an 8/10 or above), it would seem that a great deal of the negativity toward Justice is because readers are interpreting his review as a corporate-backed attempt to trick them into spending money on a product that isn't worth it.

For those of us who want video games and the discussion around them to allow for higher levels of discourse, the cold, capitalist nature of how games and reviews are consumed can be disheartening. On the other hand, it's a valid argument that perhaps ACM is not a game that engages intellect in any way and thus is not material for discussion in the context of art. That's actually the impression that I get from most ACM critics. The video game community can't expect to have thoughtful debate when the centerpiece of the discussion brings nothing to the table. It leaves critics with little to go on other than to pick apart how and why the game is an empty experience. Not that there's nothing of use there, but it's a thread that dead ends pretty quickly and with most critics arriving at the same, redundant conclusion.

Professor/Game designer Ian Bogost recently posted a review of the game Proteus on Gamasutra that is divided into 3 parts, each able to operate as a stand-alone review from distinct perspectives. One sees the player as taking on the role of a disembodied island-observer. The next is that of a traveler, and the third, a musician. This kind of review could be combined all into one piece, but by separating it into three, Bogost makes his point about the richness of the Proteus game experience through both the content and the form of his writing. This, in the current state of video game criticism, is a best case scenario: a game dense with avenues for engagement and a critic who can take something valuable from that experience and use it to craft his/her own reflective work.

Bogost's Proteus review will not show up on Metacritic. There is no score.

Product reviews do have a place and a use in the game industry. Not everyone cares or has the time to envelop themselves in long-form criticism, and scores, when properly weighted, can provide valuable shorthand. The issue is that the vast gaming public has been weened on product reviews as game criticism to such a pervasive degree that they have become the de facto standard for critical analysis. This is not a model for enrichment, but rather consumption. I'm in no way defending the behavior of commentors on Justice's ACM review, but I can tell they're hungry, and when people are hungry they lash out. The system eats itself.

:image by Icarion:
Posted by Dan Solberg at 6:23 PM