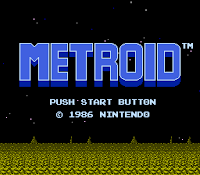 Some of these older videogame reviews will be for games I'm somewhat embarrassed to have never played. Metroid is one of those games. I feel I can't justify this omission without noting that my first full playthrough of a game in this series was Metroid Prime for Gamecube. Some would call that heresy, but I came away from Prime and its sequel having had some incredibly profound and affecting (in a good way) gaming experiences. As a result, I've been pining to go back and check out where this all started.

Two of the more amazing things about playing Metroid now are how many well-executed similarities it has to the Prime series and how much of a sense of adventure this old game could convey despite my mind being spoiled by the visually immersive gaming experiences on modern systems. The player controls Samus Aran, then-secretly female bounty hunter, equipped with an arm cannon, as she explores the planet Zebes. At the beginning of the game, Samus' abilities are limited, making the locations she can access restrained. By locating ancient relics she will learn new techniques which allow her to research new areas and progress through the game. This formula is still the core of contemporary Metroid gameplay. 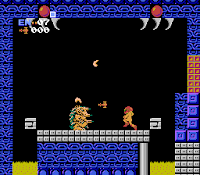 Even knowing this, I remain surprised by just how non-linearly Metroid allows you to play. There are three boss characters in the game, the final of which cannot be fought until the other two have been defeated, but you can approach either of those two first. The non-final boss characters can also be faced at any point once the required abilities have been found to conduct the platforming needed to reach them. In other words, they can be faced with a bare bones set of skills for the player looking to speed through things, or by the well-prepared player who has found all of the helpful abilities that will make the battles easier.

Another key aspect of "adventure" as a genre is exploration, which Metroid offers, but not without one caveat that my Prime sympathies can't help but mention: the lack of a map. To be clear, I would have liked a map that only kept track of where I had been, not where there was still to go. Having that sense of discovery and not knowing what's through the next door is what adventure games are all about and I wouldn't want to disrupt the up-and-running system already in place. However, when I finally reached the point where I was ready to descend to the final boss confrontation, I discovered that I had to go back and reacquire the ice beam to continue further. Without a map to assist in retraversing the entire maze, this fetch quest became unnecessarily frustrating. Alternatively, Samus could have been given the ability to switch between different beams on the fly. Sadly, I remember Metroid Prime pulling a similarly unfun backtracking stunt on me at the end of that game. Some traits shouldn't be passed on through generations. 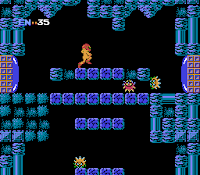 The lack of a map is truly a shame though, as it's the only aspect that mars the otherwise stupendous game. Metroid is a game that knows how to set an eerie, enveloping mood. Zebes is a harsh and alienating place, without any lines of dialogue or townsfolk to offer hints or friendly confidence. The music is bizarre and not always conventionally melodic or rhythmic, but still impressively memorable. The titular Metroid creatures are legitimately terrifying monsters. The story begins when Samus is simply dropped onto the planet and given little in the way of further direction. Granted Metroid was produced during a time when instruction manuals were actually used as a reference, so it was assumed that the player would be able to look up things like power-ups and know what they do. In an ironic twist, since the game itself doesn't tell the player anything, the world becomes even more authentic than the developers may have intended. I was consistently having to figure out what I just picked up and truly get acclimated with the item rather than the screen telling me what I could now do differently. This makes for an even more pure adventure experience without adding frustration.

Metroid is the total package when it comes to game design, so much so that the franchise isn't much different in modern iterations (though improvements have been made). It offers a legitimate challenge, one that actually forces the player to think strategically during combat while presenting puzzles and hidden secrets that test one's wits and encourage (and reward) discovery. I have come away from the game extremely eager to jump into Super Metroid in the near future.

:screenshots from VGMuseum:
Posted by Dan Solberg at 3:39 AM