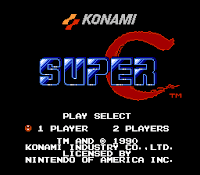 The original Contra on the NES is a classic run n' gun game that sits in the greater game canon and is looked upon with a nostalgic fondness by those who grew up with it. People tell me that game is supposed to be difficult, but it's one of those few games that I've beaten so many times that there's no real challenge and I instead enjoy it as a form of catharsis. Strange then that I'm only recently playing its sequel Super C (short for Super Contra, one would assume). Full disclosure: this review is referring to the original NES cartridge version of the game.

As with many sequels, it's difficult to talk about subsequent entries in a franchise without addressing their predecessors, especially one as iconic as Contra. Super C recycles some of the original graphics, including the protagonists, a few enemies, and sound effects. However, there are plenty of newly minted sprites here as well, and for the most part the new graphics appear slightly more sophisticated. Gameplay is nearly identical, maintaining the basic format of platforming, shooting, dodging, grabbing power-ups and fighting bosses at the end of each level (8 here). There are a couple notable exceptions including the addition of inclined surfaces, a retooling of the F gun into a charge shot, and two stages where you control the character from a top-down perspective. All three are well-executed and either enhance or take gameplay into a new direction for the series. The music is still solid this time around, but not quite as catchy as some of the tunes in the original. 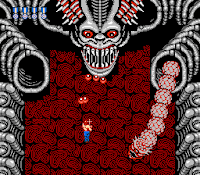 As for that trademark difficulty level, Super C proves to take a bit more skill, but maybe this is just because I haven't locked in near as many hours as Contra. That said, level 8 in particular throws a lot of obstacles in your way that if you die and lose what is likely your spread shot gun, it can be rough. We're still talking one-hit deaths here. Even so, bosses are, for the most part, a cinch. The final boss is especially a letdown seeing as you fight through a grimy, disgusting alien fortress only to discover a weird, gray, human-faced statue-like mass coming out of the ground to spew a few spike-balls your way as you easily run up to it and shoot it in the face, totally unabated. Furthermore, the lame ending then kicks in which is just a shot of a helicopter flying during a sunset, offering no text explanation or really any kind of resolution. Not that anyone really cares about the "Contra fiction," but something to add more of a sense of accomplishment would be welcome. 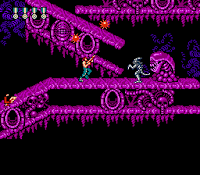 Some design choices in Super C certainly raise a few eyebrows. It's no secret that the protagonists Bill and Lance are clearly modeled after Arnold Schwarzenegger in Predator and Sly Stallone from Rambo, but the design knock-offs go further in the sequel. The running alien enemies in the last two levels are total rip-offs of Ridley Scott's Alien aliens and you could make a case that the level 6 boss' face looks an awful lot like the Predator monster. Sure these developer decisions seem a bit dubious in a way, but they also provide a gameplay experience that compliments those films pretty well. Where I'd rather criticize design is when it comes to the sharpness and clean appearance of the last two boss characters which really don't fit into the fleshy, sticky alien lair where they are found. Those fights feel more like they're against some crappy background image than an actual monster to be feared.

It's not really fair that Super C is as overlooked as it is, seeing as it's a successful sequel to a hit game. Perhaps it's the fact that Super C is short on significant innovations in the greater series that keep it from standing out. If you're only going to play one Contra game per console, you should select the original game since it's more relevant in terms of modern references, but Super C does follow-up on that formula in an incrementally satisfying way that will serve players who are already series fans just fine.


:screenshots from VGMuseum:
Posted by Dan Solberg at 6:12 AM