How long does it take to tell a good story? In person? Maybe 5 minutes. In film? About 2 hours. A book? Let’s say 5-10 hours. Video games? No less than 50 hours. This means you could watch every major Stanley Kubrick, Paul Thomas Anderson, and David Lynch film before finishing one game. Sure, the standards for game stories have changed over time as shorter action titles have steered toward a cinematic style and runtime, but the progenitors of story-driven gaming, the Japanese role-playing game (JRPG), remain as staunchly extensive as ever. Xenoblade Chronicles is the latest JRPG from cult-favorite and aptlynamed developer, Monolith Soft. In it, you play as Shulk, a “chosen-one” who brandishes a mystical sword on an epic quest to defend his homeland and unite two worlds at war, for 80+ hours.

For all of the evolving JRPG conventions that Xenoblade perpetuates, egregious game length is an interesting choice; however, it matches its expansive world. The characters live like insects on the bodies of two gigantic titans, frozen still amidst an ancient duel. Your party gradually traverses from the right leg, all the way up the titan’s back, to its head – and that is just the first act. From the “ground,” the opposing giant is always faintly, ominously visible in the distant sky. Individual areas are pretty big too, and require you to explore on foot before a fast-travel option opens up for return visits.

Battling and traversal occupy the majority of your time in Xenoblade, but their significance to the narrative remains up to interpretation. The “story” is mostly delivered in dialogue-heavy non-interactive cutscenes that flesh-out the characters and setup the next party objective. Once control of your posse is given back to you, it’s time to climb some mountains and slay some beasts. These lengthy stretches of exploration and survival put you into the shoes of the characters whose narrative motivations demand persistence and diligence. Similarly, you, as a player, must also possess a certain amount of endurance to see the journey through to the end. That’s not to say that playing the game is a struggle, just that it entails a significant physical commitment on the part of the player.

Some players may look at Xenoblade’s demands and choose to walk away from the game before the end, due to real life time limitations or in-game frustrations. EGM Managing Editor, Andrew Fitch, seemed particularly frustrated by his playthrough of Xenoblade, as evidenced in his review, so I wanted to pick his brain a bit further. He told me that he did complete the entire game, including dabbling in some sidequests, but that, in general, he doesn’t think it’s absolutely necessary to spend the full length of 80+ hours with a game to be able to evaluate its quality. “At 35 hours, a game—even an RPG like Xenoblade—has revealed its true self,” he wrote, referencing commenter outcry at Jason Schreier’s review for Kotaku. I agree with this statement, especially in terms of evaluation. You don’t need to get more than a handful of hours into a game to decide if you’ll objectively enjoy it, and if a game hasn’t made itself known by that point, it probably has serious pacing issues. However, I’d argue that stopping short of completion in a game like Xenoblade negates some of the experience of long-form play, which is in this case essential to the experience of the game.

Xenoblade took me about a month to complete, playing in chunks of a few hours here and there, and occasionally taking several days away from the game entirely. I found my attachment to the game at its fondest when I maintained a steady stream of “healthy” play sessions, where I knew that I could take a break and the game would always welcome me back. Towards the end of the game, I hit my first wall where I could not beat a boss character and continue forward.

Before this point I had never needed to actively grind through fodder enemies to level up my characters to be strong enough to topple a foe for narrative progress. That I hit this wall some 80 hours into the game made me feel a bit betrayed. I’m sure other players hit walls earlier, depending on playstyle, but mine felt like an act on Xenoblade’s part to delay my imminent completion. I knew I’d finish the game eventually, but hitting the level wall sucked all of the momentum out of the narrative as well as my general drive to play. 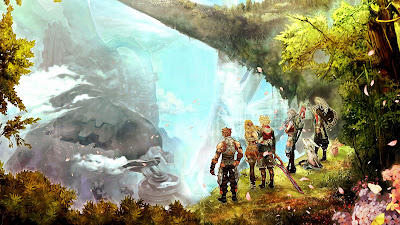 Grinding is an old standby of JRPGs, a design decision seemingly made for the purpose of extending the length of time spent playing one game. Grinding, on its own, is not an especially enjoyable experience, and the payoff is indirect. That said, every aspect of a game shouldn’t need to be fun for it to be considered good and/or necessary, as long as players aren’t being unknowingly exploited. If you could simply waltz up to a boss character at any experience level and win, the intended power and gravitas of those conflicts would be diminished. At some point we’re discussing the relative virtues of “practice” here as well, since grinding is also about testing out and refining different engagement strategies. Xenoblade, like most JRPGs, uses a quantitative reinforcement pedagogy instead of a qualitative one. The side effects of this are games that take eons to complete, but inspire a transposed empathy for the hardships of the virtual characters you control.

It’s worth examining how much “story” is really being told in Xenoblade since the vast majority of play time is spent doing things that seemingly have no bearing on the plot beyond contextual nuance. Monolith Soft previously developed a trilogy of RPGs called Xenosaga, each providing 40-50 hours of gameplay and featuring what at the time were considered extensive cinematic cutscenes. Part 1 was never released in Europe, but bundled with the EU version of the sequel was a video of all of the original’s cutscenes, running over 3 hours. That’s a long movie, but less than 10 percent of the game. I bring this up to illustrate Monolith Soft’s penchant for story-centric games that actually put the player in command the vast majority of the time. It’s the player’s choice of actions with those characters that makes the story sink or swim as a game. After all, what’s way more boring than 5 hours of expository dialogue, rote cinematography, and a short rotation of canned animations? Answer: 45+ hours of tedious button-pressing sequences, broken up only by fits of inventory management.

Xenoblade comes out mostly on the positive end of the spectrum here. Battles play out MMO-style, similar in execution to FFXII’s Gambit system, which makes for seamless transitions between fighting and traversal and fun, snappy combat. Individual battles require you to position yourself on specific sides of monsters to increase chances of dealing critical damage. Things actually happen so quickly that it takes a few hours with the fighting system to catch up and really understand what you’re doing. Once you’re there though, you can establish rhythms to maximize how different characters’ attacks can play off of one another. Xenoblade piles systems on top of systems to such a degree that you really won’t master everything unless you play well beyond the basic story path. I felt like I was constantly reaching new tiers of understanding with the combat system up until the final fifth of the game. The length of Xenoblade allows you time to figure this stuff out at your own pace. Even after finishing the game there are several parts of the battle system that I never grasped, particularly Melia’s magic spells, which could make for a totally different approach to confrontations altogether.

One of Xenoblade’s major accomplishments was how briskly and efficiently it flowed throughout its considerable breadth, level-walls in the final stretch aside. Its dialogue has an economic sensibility that prioritizes character action over character depth, making narrative setpieces attention-grabbing, if emotionally detached. This is bucking the JRPG trope of long-winded, redundant internal monologues and painfully melodramatic conversations. Not that Xenoblade doesn’t turn insular and sappy from time to time, but you end up tasting it far less than you’d normally expect. The UK voice crew deserves some credit here too for realistically grounding the characters and delivering lines in a way that brings them to life when some of the animation falls short. Outside of cutscenes though, be prepared to hear the same handful of pre- and post-battle quips hundreds of times, which will grate no matter how much you like hearing the word “jokers” in an English accent.

And that’s the quandary of the epic game: how much repetition can players take without “play” turning into “work?” The more similar battles you fight, the more likely you are to notice a multitude of annoying “flaws.” Why do party members willingly tread into poisonous water when fighting? Why is the camera so close when fighting gigantic enemies that you can’t see anything? Why is the inventory system so laborious to configure? The list goes on (again, Andrew Fitch has your back). When Xenoblade is flying high, the imperfections fade into the background, but there are bound to be lulls in any 80-hour experience.

Repetition and “practice” reveals the true nature of systems and mechanics to the player over time, both good and bad. Xenoblade’s approach to this inherent hazard is to load up with so many systems and accruable points that something is always unlocking or reaching a new level. It’s the video game equivalent of sleight of hand. This strategy works remarkably well most of the time, pushing you through slower moments without batting an eye. That said, nothing brings the whole trip to a screeching halt like detrimental AI behavior or an unwieldy camera, both of which plague Xenoblade sporadically.

Monolith Soft could have just made a shorter game and delivered much of the same content, but it just wouldn’t have been the same Xenoblade Chronicles. There is something to the 80-hour experience that 20-hour games don’t have, that they can’t have. It is a unique feeling to play such a gargantuan journey. This is because each upcoming play session is iterative, building on the last, but offering the same repetitive pleasure that keeps people tuning into soap operas on a daily basis. There is drama and progression to a point, but you know the actions to get there are going to be relatively unchanged each time. What separates playing Xenoblade from watching Days of our Lives is the sense of increasing complexity that eventually comes to a head. I’ve always found the unending nature of MMOs unappealing and desperate. In contrast, the monumental JRPG isn’t afraid to end, shoving you out of the nest and into a world in its wake. I respect that confidence; it’s a rare thing. That’s a large part of why I consider my experience with Xenoblade Chronicles as time well spent.

:Reposted on Medium Difficulty:
Posted by Dan Solberg at 1:05 AM