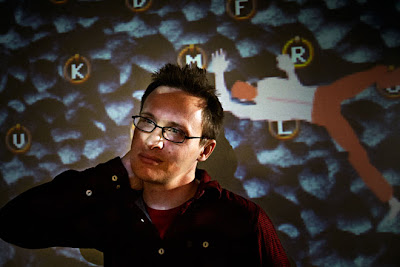 Last night at NYU Game Center, indie developer and ex-Cut Copy bassist Bennett Foddy gave a presentation wherein he detailed several core principles he strives for when creating games.  If somehow you've never played any of Foddy's games, do yourself a favor and head over to his website where you can play them all for free.  Foddy is most known for QWOP, the game where you use four keyboard buttons in rhythm to propel an Oympic runner 100 meters.  Or at least that's the premise.  You'll probably spend most of your time banging the runner's head against the ground trying to take your first step.  The results are quite hilarious as limbs fly all over the place, but there's always a modicum of understanding that you're figuring out how the system works and could maybe, actually get the runner to, well, run.

QWOP has gained a high enough profile to be visible in mainstream pop culture (making a cameo in this year's season premiere of NBC's The Office, for one), but Foddy's other games operate in similar fashion, enlightening players of the physical actions needed to control the characters in the games.  The immediacy of these games, one of the subjects Foddy's lecture focused on, allows for even a simple button press to result in a satisfying in-game consequence.  In CLOP, a QWOP-like game with a unicorn, each of the four control buttons kicks out one of the unicorn's corresponding four legs.  The animation of even one leg kicking out is so unlike anything that a real horse would do that I can't help but crack up at the mere sight of it, not to mention once you really get the beast "going."  I found it interesting that Foddy didn't directly mention humor in his discussion, since I find it to be part of the prominent appeal of his titles.

Foddy's outlook on game design shares much in common with contemporary art practice, conjuring the notion that there is a rich middleground between the two that takes into account player interactivity and artistic practice in corollary measure.  In games, designers have to choose their controller/platform.  In art, artists select their medium, which for the past half century could acceptably be pretty much anything.  Only recently have game designers been fiddling with new ways of using traditional and standardized controllers in new and exciting ways (see Johan Sebastian Joust).  Yet, art has often struggled to stretch out of the austere, institutional art/viewer relationship by limiting patrons to actions like "standing," "looking," and "walking around,"  A game/artwork that bridges the gap between the two would likely also confront these issues from both sides.  Foddy seems to be on this track as he's been hanging out with some of the JS Joust creators, developing some kind of trampoline-powered Move controller game.

The principles Foddy presented weren't without their own self-conflict though, making them more aspirations than hard and fast rules. For example, if a designer is creating a game that asks players to hold DualShock controllers backwards, a prompt to inform them of how this is supposed to work might be needed, but that would sacrifice some degree of immediacy.  A minor criticism of Journey was that an outline of a controller with some arrows is displayed at the beginning of the game to let players know that they can tilt the controller to rotate the camera.  The necessity of these sorts of prompts is debatable; the point being that there is no one correct solution.  However, I think Foddy would argue that it's best to attempt the game that adheres to principles of immediacy and fully-integrated worlds, and only make concessions when there don't seem to be any better options.

Foddy came off as a game designer on the bleeding edge of the medium, in terms of his games as well as his production practice.  He said that he hopes to show the trampoline game at Indiecade, so keep an eye out for that. In the meantime you can always try and get to the top of this wall.  Um, good luck?

Photo by Finn Taylor for Wired
Posted by Dan Solberg at 10:21 PM