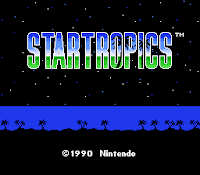 It's about time I put a non-generation-spanning franchise game under the microscope here, so I present my critique of Nintendo's StarTropics. This Japan-developed but US-only release really presents itself as a game that Americans are supposed to like. You take on the role of Mike, a baseball-loving, yo-yo-swinging adventurer from the island of Americola. If the title wasn't a giveaway, the setting of StarTropics is a series of islands, each with a humorous "cola" ending on their title. The game is broken up into 8 chapters, each taking place on a unique island, except for the final two which are on a spaceship. So we've got baseball, soda, aliens, and action/adventure. Maybe Japan had our 1990's interests down pretty well. 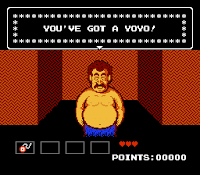 With each chapter, StarTropics presents a smaller story that needs to play out in order to progress further with Mike's overarching plot to find his scientist uncle who mysteriously disappeared. This leads our protagonist to traverse numerous underground caverns, littered with puzzles, enemies, and secrets. It's very Zelda-like in the way you usually advance from one screen-filing, top-down perspective room to the next, but the controls are altered in a significant way, and not necessarily for the better. StarTropics surfaces are basically laid out as large grids, limiting your movement to only four directions. More the issue though is that Mike is always stuck on the grid and can never stand in-between "tiles." This means if you move one way and immediately recognize that as a bad move, Mike will still need to fully subscribe to the original command, stop, and then turn around. This grid makes sense for the jumping puzzles that use actual tiles and switches, but makes regular ground movement horribly stilted.

The lack of fluid control does seemingly make the game more difficult, but StarTropics is actually a very fair game, despite the frustration it can cause. Dungeons are conquered with sometimes lengthy trial and error, slowly progressing and figuring out the tricks to passing through each room. The nice thing about this is once you figure out how to beat a room, you'll likely breeze through it on successive visits, making the restarting process feel like the game is trying to teach you rather than punish. Boss fights often require you to use the surrounding environment to defeat them, adding a level of strategy to the projectile-dodging. In general, the puzzles and action in StarTropics are smartly designed experiences that both with and despite the controls, feel very unique. 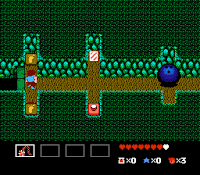 The art direction is initially one of the main draws here. The tropical ocean backdrops are a nice change of pace from the high fantasy worlds that are so commonplace in this genre. I found the whole setting to be pretty amusing, as all the islands are filled with what seem to be sun-tanned Caucasian natives. Pale-faced Mike clearly hasn't spent enough time outside in Americola to fit in with his beach-bum relatives. Visuals in the overworld are pretty bland and blocky, but the caverns have a zoomed-in perspective that lends iself to a higher degree of detail. Unfortunately, most of the caves look pretty similar, with only some palette-swapping taking place occasionally (but with purpose). The alien levels are the obvious black sheep here, presenting a jarringly divergent aesthetic of pipes and ducts to the previous crevices and rocks. 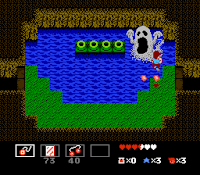 For all the connotations critics draw to the original Zelda adventure, I found the gameplay experience of StarTropics to be entirely different. Most of this has to do with the tone of the game being rather upbeat and tongue-in-cheek. I know when I first played Zelda I was much younger, but the dungeons in that game were terrifying. By comparison, StarTropics feels more like The Goonies, with a kid exploring some caves and fending off the occasional ghost (OK, perhaps I was afraid of The Goonies too, but I'm guessing most kids weren't). With the trial and error process in the dungeons, I continually had to die and restart the levels, making me consistently aware that I was playing a video game where I needed to get past some challenge. The story of StarTropics is mainly corny fun, and doesn't pull you further into the world so much as simply make you recognize that it's done some cool or cute things. This is partially due to the largely episodic nature of the chapters, but also the cliched implausibility of its alien invasion conclusion.

Maybe this review reads as a little more harsh than I mean it to, but while StarTropics pulls off a fun and unique challenge, it's also a game that I'm glad to be finished with. Maybe this says more about me than the game, but 8 chapters feels like just the right length for a game of this structure and type of difficulty. I should probably seriously avoid Demon's Souls. Thus, I leave my time with StarTropics very well satisfied, and willing to play its sequel (Zoda's Revenge) at some point down the road, but it's not at the top of my queue.

:screenshots from VGMuseum:
Posted by Dan Solberg at 7:06 PM